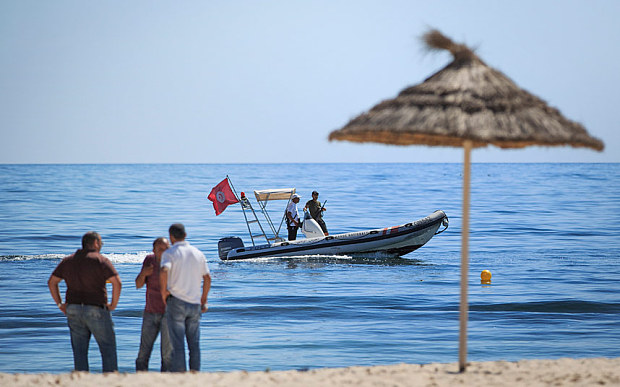 Update June 29, 2015:  The TELEGRAPH article:  HE SHOT ME TWICE… contains a story about a woman named Kristy Murray who says that she was injured by a grenade and a hand gun… stating there was more than one gunman.

“She has told relatives that she believes there was more than one gunman after she was shot at close range in the legs with a handgun. Rezgui was using an AK47”

The same paper today has an article about a young arab man written by James Badcock “I’m not here to kill you, gunman told rock-throwing Arab.”  This young Arab rescued some tourists who were swimming and states that the gunman ‘came out of the hotel’.  There are several accounts saying the gunmen came to the beach on Jet skis and a boat… contradicting the notion of one lone gunman who could not be in more than one place at a time.

And this video states the the gunman “…attacked the tourists after swimming in the sea with weapns”???  This is crazy.  This video report from Sky News also says he walked along the beach (where someone shot a very good picture full frontal with no fear that the fully relaxed guy would shoot them.  After that they say the gunman was shot in an alley where they say there were “snipers on rooftops”.  We were told the attack took 7 minutes.  How did the “snipers get into place on rooftops so quickly and how did they know which exit strategy the shooter would use?  We also are told by the young witness that there were police around the beach but they “didn’t use their weapons, leading one to believe they were, both police and snipers both given advance knowledge of the operation and told to stand down….

SEE BELOW FOR MORE…

Driving back on a Sunday night from taking the weekend off, we are listening to a British radio show taking callers, talking about the latest “terror attack”.  When we hear them patch over to a British journalist covering the scene in Washington DC to get their take on the reaction on the “other side of the Atlantic” i.e. what the Americans are saying about the Tunisian attack and what are we told?  That the Americans aren’t really covering the story of the massacre of some 38 (at last count) dead on the Tunisian beach because they are too busy celebrating Obama’s big “win” over legalizing gay marriage… Say what? Surely Americans can hold more than one piece of news in their heads… to take in news of this latest terror or is it another false flag attack?

A quick survey of the TV news and then random newspapers online reveals that so far, THE DAILY MAIL has once again inadvertantly departed from the “lone gunman” partyline and mentioned in several rather confusing references in their one article, that there are multiple gunmen… who they say, arrived on “jet skis and a boat”.  Whereas the young man who was supposedly killed lying dead in this frame (see below) (with his face obscured so we can’t really idenitfy him), is known, as journalists on one news show after another referring to only 1 gunman, as a young man named Seifeddine Rezgu.  Or is his name Abu Yahya Qayrawani?  Or is that another gunman? 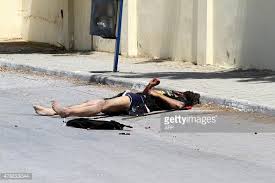 This young man we are told by the intrepid DAILY MAIL approached by “the beach” “disguised as a tourist” (as opposed to what?).. You mean he wasn’t dressed the way a “terrorist” would dress?  And how exactly does a “terrorist” dress?

They say that he had a cell phone that he presumably received a phone call on and then “tossed” into the sea (authorities we are told are now searching for that phone because it may have “pictures on it of the other assailants”??  Really, like he took pctures of his accomplices?  And was the phone call the Manchurian “trigger” call.. programming him to then begin his killing spree?  Or was his gun shooting blanks while the real shooters were arriving in jet skis and a boat?

Then we are told that he was “laughing” as he shot people.  And, like the Aurora Colorado “lone gunman/patsy aka manchurian candidate” he shot 60+ people, killing upwards of 38…  In other words he was a pretty damn good shot and people just didn’t get out of the way fast enough or he got very lucky.  I will leave it to the military guys who read this article to tell me whether shooting and killing 38 people in 7 minutes (the length of time he supposedly carried out the attack) is possible or even probable.  And he apparently was acting like a tourist before taking the kalishnikov out of a “beach umbrella” where he had supposedly stashed in in advance and in preparation for his planned attack?  As we are to believe.  And began shooting into a crowd.

At any rate, several times in this Daily Mail article they refer to “assailants” and “gunmen”… so we can assume THERE ARE MORE THAN ONE GUNMAN… And this is where it gets interesting because none of the TV news reports or the subsequent article in SKY NEWS talk about any other gunmen.  What is going on here??

Moving over to AL JAZEERA we reach PAY DIRT when we see their article mentions only ONE LONE GUNMAN but their VIDEO NEWS REPORTER reveals GUNMEN who are battling security forces …. mentioning several times in the course of the report….Gunmen.  “At least 2 attackers”…

..”Witnesses of Friday’s attack in the resort town of Sousse said the assailant took his time, targeting people at point blank range first on the beach and then around the swimming pool, reloading his weapon several times and tossing an explosive.”-AL JAZEERA

And meanwhile, the lone gunman is supposedly in 7 minutes, reportedly taking his time, reloading his weapon, shooting point blank, and “tossing explosives”… The guy was well trained apparently and very busy “taking his time”….

Indications are that we have the makings of a coverup and false flag to instigate an escalation banging the drums for war and intervention especially by the British for launching WWIII targeting the so-called “islamic State”.  Meanwhile, we know ISIS/ISIL is funded by the Saudis, U.S. and CIA and Israel.  (See my interview with Scott Bennett for more on this:  projectcamelotportal.com/component/k2/item/3785-scott-bennett-cia-swiss-banks-funding-of-isis

Addendum:  Did I mention that 2 more Google employees were among those killed in the attack?  See my recent article… ANOTHER GOOGLE EXEC DIES... for mounting evidence that could have had something to do with the motive for this attack.. What is going on at Google and what are their employees involved in that could end up getting them killed?