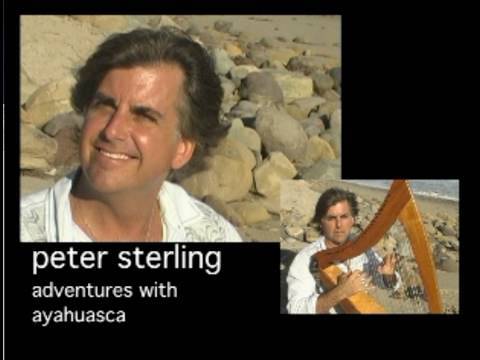 Several months ago we interviewed Peter Sterling. Due to sound issues we did not release it at that time. I have since found a work around that has eliminated most, though not all of these issues. This interview took place on the beach, hence the sound of the ocean became problematic. Upon Peter’s request I have now re-edited it and am releasing it here for the first time.

Due to the subject matter which concerns his encounter with 2 gray aliens during an Ayahuasca experience, we have included a cautionary note at the beginning of the video, reprinted here as well. While, clearly, Peter has the best of intentions, it is not at all certain that the information you are about to hear, is the truth.

Special note: Project Camelot does not agree with the message contained in this video. Due to problems with sound we have hesitated until now to release this interview. At Peter’s request we are releasing it now for viewing. We encourage you to use discernment when watching and remember that often, the Grays use screen memories and have an agenda behind their actions.

We release this interview at this time as an investigation into the nature of reality and one person’s testimony to his experience.

We also cannot recommend use of Ayahuasca nor do we reject it.

Due to the number of emails I have received regarding this video I have decided to go into a bit more detail as to why the information in this video is problematic and may actually be very misleading. And to explain why, knowing this I would go ahead a release it.

Going into 2012 and the future beyond we are clearly entering a time when, regardless who you speak to, we will be encountering increasing changes here on the planet as well as within the nature of humanity. Even now, many people would agree that they are experiencing changes in how they perceive “reality” or what has until now been considered consensus reality by most. With the added influence of climate changes, electromagnetic changes, the changes on the sun and the geophysical play of forces around us along with the continued roll-out of the NWO amidst a gradual but sincere, mass awakening on this planet it is no wonder people are highly charged emotionally and some are even becoming more and more mentally unbalanced.

Project Camelot was set up to bring forth the testimony of whistleblowers from black or secret projects along with the discoveries of experiencers and researchers. We did not set ourselves up to be arbiters of taste (such as mainstream media). On the contrary, we established Project Camelot in order to get the truth out regardless of the guise or apparent contradictions found therein. The aim was and still is, to challenge the consensus view of “reality” and what it means to be human, at this time on this planet. Therefore, nothing, could be considered “off limits” for us to investigate.

In putting out the information using the interview format, on video and audio we purposely used this approach in what I have repeatedly referred to as “guerilla filmmaking”. And that is what it is. Our technical skills were never the focus. What the intention is, is to get the truth out whenever and however possible. Which leads us to the question, what is truth? Is one man’s truth another man’s deception? One can get pretty philosophical when considering the real nature of this multi-dimensional multi-verse we live in. Suffice to say, that within the various levels one can view from, it has been our premise that there is much more going on here on Earth, than is addressed by consensus reality and it is worth investigating. In other words we really do live in a matrix (or series of matrixes) and that it behooves us to find out what is really going on…

To that end, Project Camelot presents witness testimony. We are not about documentation or tangible “evidence” although we don’t reject those aspects should they be offered. However, finding tangible evidence is not our focus. Our focus is getting the testimony of individuals before the camera, under questioning, to reveal what it is they know, think they know or are in the process of finding out. Therefore, everything our witnesses say, and yes, I call them all witnesses because they are bearing witness to the nature of reality and their experience and sharing it with us… is to be considered.

We chose our witnesses with care and use a lot of our own intuition in bringing any particular story forward for consideration by our viewers. We are not going to tell you what is true and what is false. We will not put ourselves in the paternal position of telling you how to think, what to think or what conclusions to draw. On the contrary. I have a profound conviction in the abilities innate within each and every spiritual being to be able to discern and decide for themselves what they choose to believe as truth. And I have an even greater dedication to the freedom and sovereignty of each person to make their own choices as to what resonates and what does not.

We are not here to spoon feed you “the truth” about the nature of reality or what it means to be human. That is for you to decide. What we will do is present what we find to be worth considering. Both the positive and negative aspects of our realities… We want to open the dialog not close it down.

Therefore, with the above in mind I wish to offer the following in regard to Peter Sterling’s personal testimony about his experience with the Grey ETs he encountered during an Ayahuasca experience. You are welcome to disregard what I say if it does not resonate. In addition to presenting the opinions, views and witness testimony of others, we at Project Camelot, both have our own views and opinions. And you will, from time to time, encounter those, while visiting this website, or watching our videos.

Some people are confused because the Greys that communicated with Peter referred to ascension and elevating our frequency in order to move off planet and go into the 5th dimension. So what is so different, people are asking, than what for example David Wilcock talks about? The difference is this. The Greys are stating unequivocally that the Earth is going to become uninhabitable. They are telling Peter to abandon this planet. To prepare to leave. In essence they are saying our future is certain…and this is not the only problem with this story, but I leave it to you to determine what else may be amiss.

A very good primer for understanding the nature of positive (service to others) vs. service to self or negative ETs is the work of Marshall Vian Summers, Allies of Humanity. Or the work of Alex Collier. Or Laura Knight-Jadczyk. All three of these people are dealing with of- planet beings that have conveyed, very well, what the positive service to others beings consider to be the proper way to behave with regard to offering guidance while at the same time respecting the sovereignty and freedom of choice that is crucial to humanity at this time, on this planet in this dimension.

If you use discernment and listen carefully to what Peter describes as what he was told, you will begin to question whether the Greys Peter is communicating with are truly service to others… and whether they just might have an agenda.

It is absolutely, crucial at this time, that each and every one of us develop our own ability to discern truth from falsity with understanding. Why now? Because from my point of view, it is highly likely at some point in the future, many of you may be faced with a choice on whether to believe a scenario not unlike that depicted in the TV series “V” where you will be faced with the kindest most genuine of beings, offering you choices on what direction to go in the future. And if you have not learned how to use your own powers of discernment you may well experience an extremely unpleasant future or even a destructive end. Therefore, Project Camelot encourages you to think and consider all sides of every question. We do not learn only from seeing the positive… in fact in this dimension the lessons are most concerned with seeing the polarities and attaining the mastery to discern how to balance the light and dark.. How to love with wisdom. How to see with the heart and go beyond the illusion of opposites into the unity of one. No one can do this for you. Nor should they.