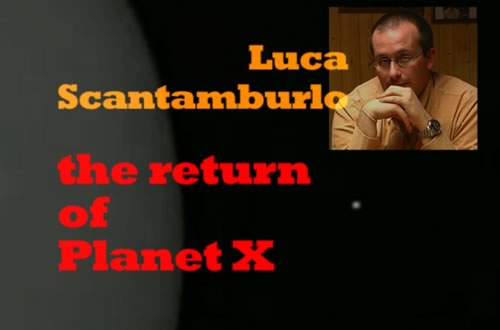 The Return of Planet X

Luca Scantamburlo, an Italian journalist of tremendous heart and intelligence, is a courageous and independent UFO researcher who took it upon himself to publicize the events surrounding a fellow-Italian, Cristoforo Barbato, a few years ago.

We are also in touch with Barbato, but he speaks no English and was not in a position to meet with us. So it fell upon Luca, who had investigated Barbato's story and interviewed him at length, to present to Project Camelot the story of what Barbato had learned about the return of Planet X.

The story, at its simplest, is this: Barbato had written an important article about the Secrets of Fatima, focusing on the mystery of the untold Third Secret. Following this, he was contacted by someone who told him he was a Jesuit priest, working for the Vatican Intelligence Service (SIV), and who had important information to reveal. At first Barbato was skeptical, but the Jesuit was persistent; and eventually Barbato was able to substantiate all his claimed personal details. The Jesuit was exactly who he said he was.

At Barbato's insistence, they finally met in a public place in Rome. At that point the Jesuit gave Barbato a significant amount of information about the return of Planet X, which was being carefully tracked by the Vatican and others; and handed Barbato a two- minute videotape – never publicly released, although this short clip (which we incorporated in our video) appears very similar – which the Jesuit said was Planet X filmed at close range from a classified Vatican-controlled space probe called Siloe.

This, and the complex web of detail and controversy that surrounds it, was the subject of our interview. Luca is the foremost English-speaking authority on this subject, which is why we approached him. We were charmed with his friendship, courtesy, intelligence, and the depth of his own research and analysis, and are pleased to present it all here in a comprehensive and important two-part interview.