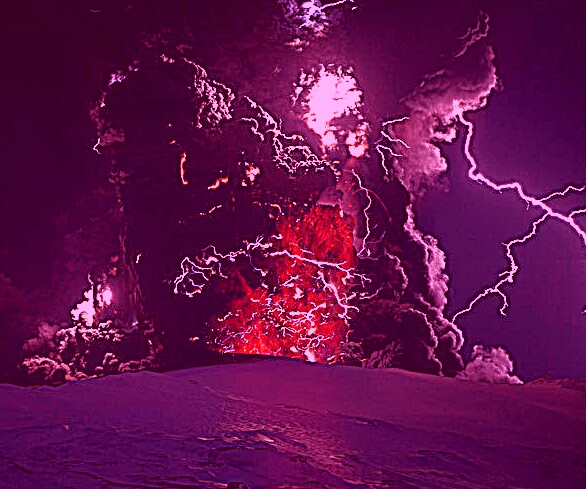 LOS ANGELES – October 17, 2019 – It has been nearly 1-1/2 years since the May 2018 Kilauea volcano eruption and consequential events, yet while most ground opening fissures have subsided, many still exist molten active bursting through the surface where trees and more are seen burning.

Strangely, officials today persist in misleading residents with more than just a notion of ‘recovery’. Now ‘redevelopment’ and ‘planning’ are underway in Puna politics on the big island of Hawaii’s chain of smaller islands.

Puna is also specifically where the ORMAT TECHNOLOGIES, INC. Puna Geothermal Venture ( PGV ) has begun paving its new roads to re-open, to return to drilling and fracking volcano geothermal energy it was converting as an electricity utility until its deep dark dirty secrets began being largely exposed in 2018.

Regardless of the 2018 ORMAT PGV over-drilling of its bore-holes, resulting in drilling too deep, which punctured a sub-surface lava tube feed of the Kilauea volcano, until it was too late.

Magma from the Kilauea volcano primary upper chamber was resultantly drained out and consequently over-ran giant swaths of Hawaii’s Puna real estate property forcing evacuations of hundreds of residential homes, which caused thousands of people to become displaced, economically ruined and other pain and suffering.

A geothermal utility business that wasn’t reeled in until nothing remained as it once was.

ORMAT TECHNOLOGIES INC. and its Puna Geothermal Venture ( PGV ) is planning to go right back into business with its noisy plans of expansion drilling more bore-holes into subterranean volcano lava tube thermal vents in the same region that still remains ‘unstable’.

Bottomline? Dangerous businesses need to stop ruining Hawaii, which can no longer be ‘fixed’ back to the way it used to be. There is no way to correct the ORMAT PGV disaster created while Hawaii continues getting worse.

They ( ORMAT and PGV ) are not gods. No human being can ‘restore’ or ‘redevelop’ an entire subterranean volcano lava chambers and lava tube network infrastructure system after it was breached in 2018, and ‘everyone’ needs to get ‘that understanding’ riveted in their mind so, they can begin evacuating while they still can; unless, they have a death wish – as it most certainly ‘will’ become.

While some may perceive my report as a defacto or dejure ‘Chicken Little’ story, I highly recommend you begin in-depth research with 50-years of experience in government ‘good ole boy’ contracts where one hand feeds the other for ‘material gains’ and ‘global industrial dominance’ over less knowledgeable people en-masse, and only ‘then’ will more people begin to awaken to the fact that they voted-in nothing more than corruptible bureaucrats who accepted the brown envelopes stuffed with cash rather than lose power over others.

Anti-Corruption A.I.? To fix this type of human life-threatening corruption is to begin considering the allowance of ‘Artificial Intelligence decisionmakers’ programmed with a ‘prime directive’ to ‘protect masses of human beings’ over only a few.

What Hawaii Should Be Concerned About –

They’re likely to encounter a big unfortunate surprise headed their way though.

What few, if any residents know, are the recent discoveries I’ve just completed researching that proves both ‘political officials’ and ‘businesses’ do ‘not’ want citizens knowing any ‘negative news’; even though it is the same greedy people who have all decided to gamble-away lives along with over $63,000,000 million dollars in federal national, state and local hard-earned taxpayer monies via a long list of grants designed to stimulate ‘redevelopment of Puna’, and hush-hush side-line private placement program ( PPP ) investments going on behind the scenes.

All this is going on at a time when everyone should really be abandoning such notions to seriously consider evacuating the entire island at-least until other far more critically dangerous measures can be fixed to better determine if the island is even going to settle down for a while.

In the meantime, it might allow USGS to effectuate the much-needed repairs on its sensor equipment that cannot now even provide any full picture for them to even know what is actually occurring in and around the Kilauea crater.

So, while lives continue to remain even-more at-risk, politicians are focused on spending hard-earned taxpayer’s monies for ‘rebuilding their infrastructure’ more-so, instead of seriously considering ‘repairing or even improving scientific devices, systems and monitoring equipment’.

USGS scientist Don Swanson explains why researchers are so interested in the 70 meter deep water pool growing from a ‘pond’ into a small ‘lake’ near the center of the Halema’uma’u Crater pit within the Kilauea volcano on the big island of Hawaii.

Currently, approximately 70 meters of ‘green colored water’ claimed by USGS to be ‘ground water’ is filling the bottom of the Kilauea volcano crater where an additional 70 meters of water is expected.

A better overflight film ( courtesy: Apau Hawaii Tours ) of the green colored water naturally forming the small ‘lake’ or ‘pond’ near the bottom of the Halema’uma’u Crater pit within the Kilauea volcano on the big island of Hawaii.

The Kilauea volcano enormously large and heavy lava shelf that began being stacked-up and spread-out through the SouthWest Rift Zone ( SWRZ ) as well as the even-larger East Rift Zone ( ERZ ) all the way into the Pacific Ocean area throughout 2018 through 2019 piling up lava on top-of-the weakened Hilina Slump suboceanic pinnacle.

So heavy has the Hilina Slump pinnacle become heavily laden with lava stretches ‘both Rift Zones’ ( SWRZ and ERZ both running parallel to their shared coastline ) is being pulled toward the Pacific Ocean where the incredibly large area of the East Rift Zone is expected to rip apart 10% away-from the big island of Hawaii.

Additionally, Hawaii’s much larger Mauna Loa volcano is now ‘rising up’ on one side of its summit plus, has now very recently ‘doubled the quantity numbers of earthquakes’ with swarms spreading out toward Kilauea volcano that sits next to it.

Abutting volcanos ( 2 ), Kilauea and Mauna Loa, where now so-much activity is currently occurring that USGS recently raised its alert level up one ( 1 ) full notch on its scales.

The combination of all of the aforementioned natural leading consequential indicators now actually raises Hawaii’s catastrophic possibilities in the not too distant future, of:

a. Mauna Loa volcano earthquakes are growing more toward intensifications where a forceful eruption is expected to take place;

c. Puna lower rift zone and lava spread build-up atop the Hilina Slump pinnacle is expected to break-off 10% of the island geographic mass into the Pacific Ocean, and with such a forcefully large displacement of ocean water consequently bring-about the scientifically predicted tsunami; not only for the big island of Hawaii but other adjacent islands within the State of Hawaii chain of islands too.

For anyone to consider any ‘recovery’ and / or ‘redevelopment’, in-lieu of the current state of geologic, volcanic and oceanic affairs, is not only ludicrous but rather more-so a ‘death wish’.

I humbly entreat reconsideration for anyone wishing to main on the big island of Hawaii because that state has not the wherewithal nor inclination to evacuate anyone, which is akin to those living in New Orleans, Louisiana adjacent to the Mississippi River delta at the Gulf of Mexico ‘rebuilding’ when they know  full-well that the next large hurricane is simply going to eventually flood them forcing their evacuation inland.

The island of Hawaii has ‘no quick nor suitable refuge inland’ as mainland America does to quickly accommodate emergency exits for people.

In Hawaii, people face very few passable roads to allow for evacuations to anything other than the ocean or an overcrowded airport where passenger airplanes cannot fly through the air where erupting volcanoes spew volcanic ash into the air where it clogs up aircraft engine turbines.

Some may decide to ‘leave with their life’, rather than ‘gamble their life away on Hawaii’s still dangerous areas.

As ‘politics’ and ‘money-grabs’ do not appear focused on ‘preserving life’, residents of Hawaii must choose quickly.

A lot of people know very little about me or my past 1/2 century in the global information industry.

Today, I’m an ex-CIA spy, elderly, handicapped, Viet Nam war era veteran, and foreign national in-hiding as vehicular homeless whose unqualifiable for any benefits for the past 13 years; the last 7 years of which, I volunteer full-time utilizing my unique skillsets for what’s called-for to inform the people with no-nonsense key-critical information delving into matters that government officials would prefer mainstream news mislead the public away-from with clever distractions of misinformation.

That is why I am an outcast, living on the streets of Los Angeles, and need help to survive the few years left of my life.

Thanks for any assistance ( small or large ) you may comfortably afford without causing economic harm to yourself or someone you know.