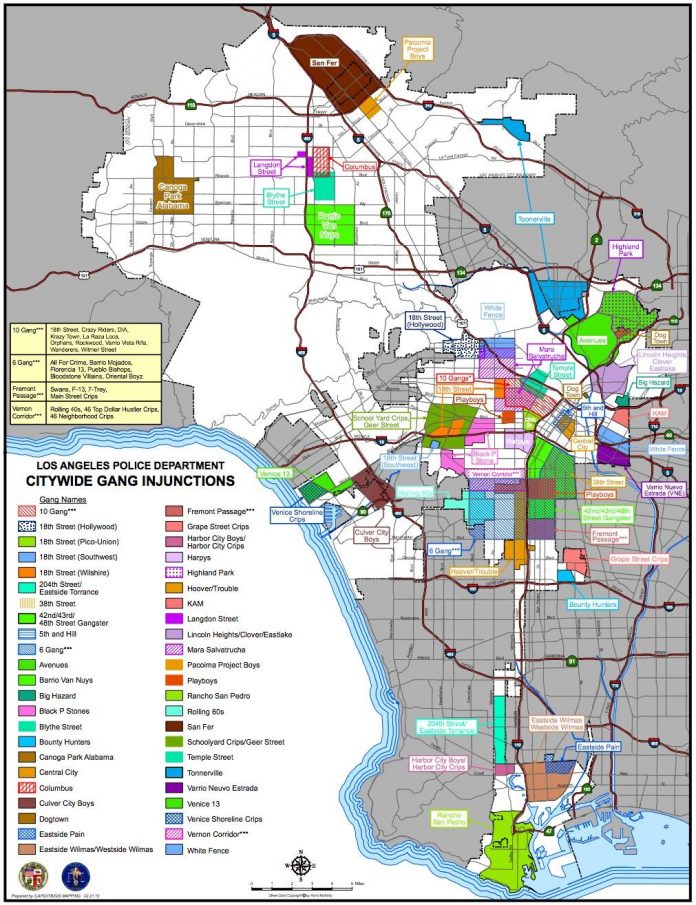 Mara Salvatrucha, known as “MS-13,” is an international criminal gang that originated during the 1970s in Los Angeles, California.

‘Children’ make up the majority of suspects arrested for killings attributed to MS-13.

In lieu of raids to be conducted this Sunday, insiders indicate areas such as East Los Angeles may likely see gun battles likely ensue within the belly of the bestial gangland territories, plus other key strategic areas unknown to the public.

Wake up, you’re not in Kansas any more. You’re in Los Angeles, now, and in this case the ‘South Bay’ area of southern California’s most sought-after extremely.expensive real estate with drop-dead gorgeous views as far as the eyes can see and home to Trump International golf course just up the coast from a former NIKE Hercules nuclear missile site, plus more.

This fantasyland remains drilled into resident’s minds because of flowery mainstream news media controlled by money-filled iron fisted real estate developers, real estate brokers and agents and others driving its local economy with several strong branches of military and international ports of call contributing to making the rest of the State of California, the fifth ( 5th ) largest economy in the World amongst all foreign nations so, there’s alot at-risk in preserving that picture.

And, that’s precisely what most people see; or, refuse to look-at by otherwise simply dismissing what they’re led to believe are only ‘isolated incidents of criminal element visitors’.

If residents were to ever realize all the local South Bay area dirty little secrets being covered-up by pillars of their community using local politicians and law enforcement silencing real news, tourist dollars would instantly be scared-away while simultaneously lowering real estate values.

In 2015, a drug deal ended badly with a murder of an East Los Angeles gang member visiting the South Bay area of Point Fermin park in San Pedro, California.

City of Los Angeles Department of Recreation and Parks area of particular law enforcement interest will undoubtedly be this upscale residential coastal park on the bluffs of San Pedro, California at ‘Point Fermin’ overlooking the Pacific Ocean island of Santa Catalina, and Ports Of Call complex of ‘outdoor seafood restaurants’ immediately adjacent to the Port of Los Angeles where many MS-13 gang ‘family members work’; unloading international container ships.

Point Fermin park on Cinco De Mayo ( May 5th ) that held Los Angeles gang member ‘custom car shows’ and their family members, dramatically changed in 2015 with an even-broader show of force. Now, ‘every weekend, Point Fermin park is totally consumed with ‘spanish music concerts’, ‘spanish catering trucks’ and more for gang members and their families of relatives after the drug deal murder involving one of their “homies” ( a gangland ‘home boy’ ) occurred.

And, on long weekends, gang members and their families spend nights in the local areas at their Port of Los Angeles union worker homes surrounding the South Bay coastal area of Los Angeles in Southern California.

Increased vehicular searches by local law enforcement is expected at the entry of the park at Point Fermin on Saturday June 22, 2019 and Sunday June 23, 2019.

Los Angeles gang members and their families will be exodusing nearby suburbs adjacent to downtown Los Angeles after they all were alerted on Friday, June 21, 2019 by ‘all mainstream news media outlets’ broadcasting reports in-advance of DHS ICE planned raids to begin Sunday, June 23, 2019.

What was once, ‘this’ type of weekend at Point Fermin ( click link immediately below ):

Became, ‘this’ type of weekend at Point Fermin today ( click link immediately below ):

To what every weekend now sees as a much different park, this will not end until something turns it back around to the way this once peaceful non-threatening park once was.

In 2013, MS-13 became a huge problem in America where Obama Administration politicians allowed it to fester up to epidemic proportions it has become all across America today.

What remains unclear, is:

:Why the Trump Administration DHS ICE leaked information in-advance to the mainstream news media about its ‘Family Op’ raiding day?”

There Is No Gang Honeymoon –

Rap music gang-stars would have America’s youth believe they are uniting, but rest assured whom ‘they are all appearing to be united with’ are ‘all against a civilized society’ and totally an ‘anti-America Faction’ ( AntiFa ) that kicked their play right in-to corrupt infestations of radical political thought in America today so, when you hear gang members speaking about “City Support” through local government politicians, know that gangs are becoming stronger in local communities against members of decent citizens.

Our war remains against gangs without support for anything but overthrowing domestic and foreign terrorist interests seeking to tear the very fabric of what America’s soldiers fought and lost their lives over to protect; individual liberties and freedoms from dictatorship and potentate enslavement of the human race.

DONATE: For 7-years of voluntary research and reporting, please consider anonymously supporting Paul’s efforts by clicking directly on his PayPal donation link ( below ):