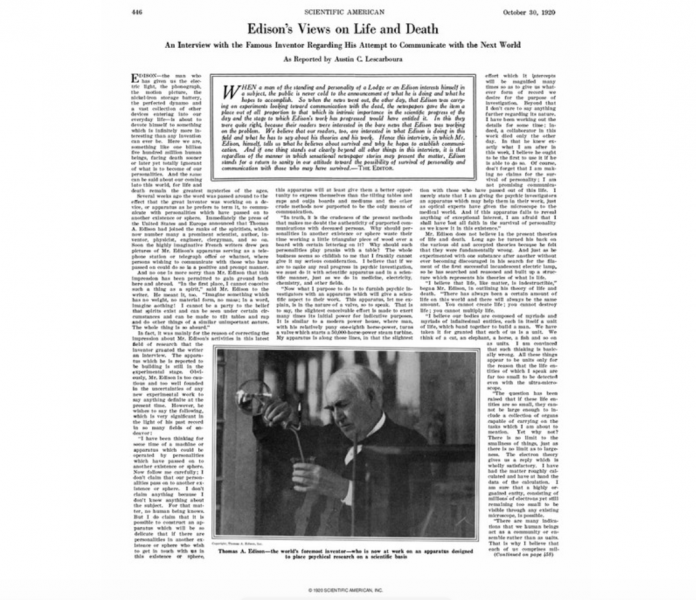 LOS ANGELES – April 17, 2019 – Thomas Alva Edison, Nikola Tesla, James Gilbert Ernest Wright, William O’Neil, Sir William Crookes, Michael Faraday, along with a few other like-minded members belonged to a yesteryear secret international academic enlightened Society for Psychical Research ( est. 1882 ) that overlapped the earlier Ghost Club ( est. 1862 ) interested in conducting studies, experiments and developmental prototypes surrounding far-more than what the public ever came to know them as being associated with or involved in.

What Was Unknown Before Lingers On Hinged To Enlightenment –

What was never publicly released involved emerging archeo-archaic technological understandings surrounding what involved far more than what we refer to as ‘electrogravitics’, ‘anti-gravity’, magnetic field disruptions’, ‘time rift anomaly phenomena, ‘interdimensional telecommunications and teleportations’; the latter of which has been referred to over time, as:

Edison’s Views On Life And Death by, Austin C. Lescarboura

October 30, 1920 – An interview with the famous inventor regarding his attempt to communicate with the next world.

SPECIAL NOTE #1: The following video ( immediately below ) was seen years before realizing infinitely more existed “outside the box” while most occupy a singularity dimensional space timeline; made their’s, only for a while – until taken to behold more.

The CRAYOLA ( crayon company ) eventually acquired Jim Wright’s invention through G.E. seeing all three ( 3 ) acknowledge ‘James Gilbert Ernest Wright as the inventor’ of a yesteryear U.S. war-time material version of a Commercial Off The Shelf ( COTS ) product, which was eventually marketed publicly under the name “Silly Putty.”

To review Wright’s first Patented material invention ( circa 1929 ), simply click the box ( below ) for the Adobe Acrobat Reader ( .pdf ) download from the U.S. Patent and Trademark Office file:

Interestingly, James G.E. Wright had several patents, of which Organo Silicon-Hydride ( exhibits ‘nano like behavior’ ) he incorporated as a protective topical coating that drastically reduced oxidation of highly susceptible metals at high altitudes for the U.S. War Department ( now known as ) U.S. Department of Defense (DoD).

While this report is by no means comprehensive nor to be eyed as a compendium representative of all secret society academia studies, inventions ( patented or otherwise ) or developmentals, the unsung tireless and tragic travails of individuals ( living and dead ) who gave ( for whatever reasons ) of themselves to advance knowledgeability for the beneficial sake of all mankind is recognized in reverence thereto.

Your suggestions and comments are appreciated via e-mail (further below).

If you care to donate please click my PayPal link ( immediately below ):

[ NOTE: For alternative donation methods, send me your e-mail asking how best for you to send me a donation. ]

Thank you for visiting!

Cordially submitted for your review and comments by,