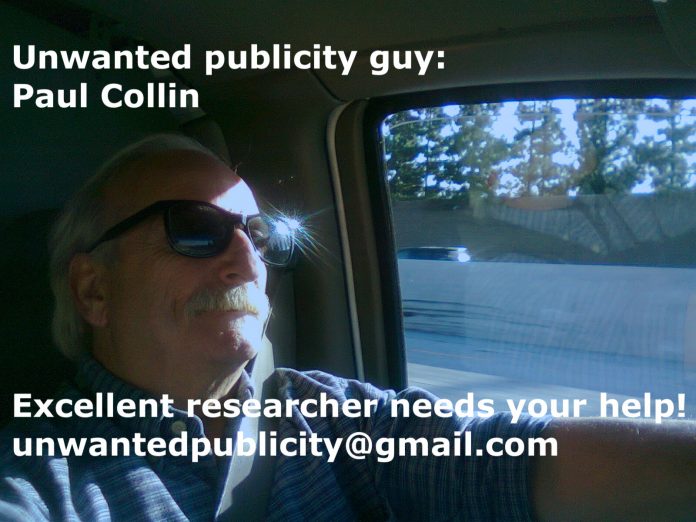 Your heart and all that you’ve done for me brought me to tears
watching your broadcast done on my behalf.

If people only knew the extent of my plight just to survive at this
moment in my life, at my age, in failing health, and being socked /
sacked so many times these past years where I didn’t give one hoot
about myself but ‘other people’ instead.

It’s just such an incredibly personal and humbling moment in my life
when I see a man of your stature producing a special edition of The
Goldwater Report broadcast trying to help ‘me’.

It is a sobering moment in today’s world to see a man of my talents
humbled down onto his knees because I am broken for having chosen the
selfless career path as a volunteer for over 6-years now after all
I’ve been through around the world.

Fighting the fight for others; those, innocent people whom blamed
themself for reasons they could never fathom were complex U.S. foreign
clandestine intelligence government operations utilizing global
fraudsters manipulating individual investors whom were duped under
secret pretexts into financial games they knew nothing about.

One such case situation, the last one, Scott made a series of ten ( 10
) YouTube video broadcasts that introduced ‘me’ ( anonymously,
at-first ) to these facts, here:

I followed-up by my own in-depth international report, which
mainstream news broadcast repirts only told a smidgen-of, what really
happened here:

All I have been doing since I returned to Ameeica from my Eastern
Europe assignment ( 2002 – 2006 ) is just trying to give people
‘credible inside information’ to sharpen them up so, they never get
conned again by such complex treacheries.

I’ve seen families torn apart, suicides, and murders because people
around the globe were duped into emptying their life savings and
annuity accounts to Non-Official Cover ( NOC ) foreign government
intelligence operatives protected by U.S. federal government
operations. This, is the untold story of gpvernment crimes within
other crimes people never hear about on mainstream news broadcasts.

Since 2002, 16-years now, I have fought the good fight against
international investment frauds.

And, in doing this, I have suffered the mental anguish and physical
pain of my body withering down faster than normal, and then not being
able to care for myself because of being rendered as a now handicapped
war veteran for almost 2 decades now.

I have ‘no public resources’, as most poor and homeless individuals do
so, this makes it extremely difficult to survive.

Thank you for taking time and energy to produce your recent broadcast
calling on people in your audience at The Critical Post Chicago to
help me.

You, and Kerry Cassidy ( of Project Camelot ) have hearts the size of
high-rise buildings towering over this great Land we call America
today.

Many blessings upon you ‘both’ and your ‘collective audience viewerships’.

Donations for me can be accomplished by simply clicking on my PayPal
donation link, here:

Humbly with all my respect,

CHANGING THE SYSTEM REQUIRES THINKING OUTSIDE THE BOX UPDATED!