No longer difficult for many people – now growing in belief across America – is what can only be described as a new trend of ‘surreptitious pretexts’ designed to divide a Nation of people ‘easily distracted away-from understanding information comprehension in what they are reading.

Important, is allowing individual citizens their own ability of far more accurate and quick independent assessments based on ‘what information multiple or single headline truths immediately reveal; information truer than another story-line being only closer to yet only another ‘second choice information belief’, yet even further away-from a “Third Choice Truth” – 100% truthful information never known by Earth’s mass general populations of human beings.

Secret knowledgeability, unknown to many, continues keeping mass general audiences away-from intelligence so sensitive that if ever uncovered would surely topple existing socio-economic principles highly guarded by corporate-led security guards of many governments.

While ordinary people may not be patient enough to research and comprehend even-more, reviewing and being facilitated with basic comprehension in-to ‘self-exercising an alternative reality pathway in-to a world beyond and returning back in-to the world we know’ is an extremely well-guarded secret tradecraft of certain national intelligence organizations around the world successfully practiced now for decades surrounding something as simple as ‘beings taught one’s ability to intently focus on certain objectives’ – I refer to as ‘Focused Intelligence Goals’ ( “FIGs”).   [ NOTE: See, e.g. “RESEARCH -” ( listed links – further below ) ]

People have quickly contracted the viral hearing infection phrase “Fake News” ( also known as ) ‘False Information’ or “Disinformation,” the latter methodology used for decades by organized intelligence groups ( public governments and / or private entities ) while far more people still remain unaware of ‘how to discern fact from fiction’ based on what they are fed to read.

Sadly, there are groups of people whom believe ‘one matter’        ( understood beliefs ) while other groups believe ‘other matters’, neither of groups knowing the ‘third choice truth’; the latter, cleverly kept away-from both groups.

This particular report ( herein ) does ‘not focus’ on the “Third Choice Truth” and only seeks to heighten awareness of ‘how to more easily identify’:

Only one ( 1 ) ‘example’ ( below ), of what many multiple thousands more of other similars now readily exist and are easily available for all people to review.

‘Comprehension’, however, may only be fully understood once this singular example ( below ) is reviewed so, as-to easily open-up people’s ability to ascertain ‘what word combinations’ (revealed in media-led entrainment storyline articles ) are very cleverly and purposefully designed to most creatively, easily, swiftly and ‘strategically trick people into ‘false information belief systems’. 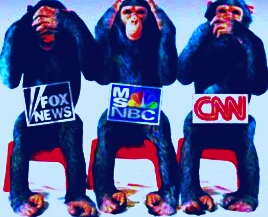 Classic example of a publicly-aimed ‘primary’ “bait and hook headlines” are, as follows:

The aforementioned ‘primary misleading news headline’, is actually linked to purposely point people into reading yet another ‘secondary misleading headline’ storyline article that is, as follows:

President Donald Trump reportedly has poked fun at his right-hand man for his socially conservative views.

Pence ‘reportedly’ declined requests, from The New Yorker for interviews for the story written by Jane Mayer and, titled: ‘The Danger of President Pence’ [https://www.newyorker.com/magazine/2017/10/23/the-danger-of-president-pence ].

The piece touches on a range of issues, including the ‘possibility of [ U.S. President ] Trump’s impeachment’ and ‘Pence taking over the Oval Office’.

It [ The New Yorker magazine article ] notes, that:

“Pence’s odds of becoming President are long but not prohibitive. Of his forty-seven [ 47 ] predecessors, nine [ 9 ] eventually assumed the Presidency, because of a ‘death’ or a ‘resignation’.”

The President also reportedly “belittled” Pence’s ‘views on abortion’ and ‘opposition to Roe v. Wade’ [ a decision weighed by the U.S. Supreme Court ] during a meeting with a legal scholar, saying in regard to the Supreme Court hypothetically overturning the precedent: “You’ve wasted all this time and energy on it, and it’s not going to end abortion anyway.” And, when ‘that discussion pivoted to gay rights’, Trump is said to have joked, “Don’t ask that guy – he wants to hang them all!”

3. Political Misalignment – Trump and Pence do not always align politically. Trump campaigned as a political outsider while White House counsellor Kelly-Anne Conway reportedly described Pence as “a full-spectrum conservative” when it comes to social, moral, economic and defense issues. Bannon [ Steve Bannon ] said Pence is Trump’s connection to the most conservative portion of the GOP establishment.

4. Presidential Ambition – Harry McCawley, a retired Editor at Vice-President Pence’s hometown newspaper, told The New Yorker: “Mike Pence wanted to be President practically since he popped out of the womb,” while the Vice-President carries a modest demeanor, McCawley said Pence is “very ambitious (even ‘calculating’ ) about the steps he’ll take toward that goal.”

McCawley died of cancer in September [ 2017 ], but knew The Pence Family – in-part through the Vice-President’s mother [Nancy Pence Fritsch ] – who wrote a column for the newspaper.

5. Presidential Positions – Bannon [ Steve Bannon ], who is no fan of the GOP establishment, told The New Yorker he’s worried about ‘what kind of President Pence would potentially be’. He reportedly referenced Pence tied to The Koch Brothers, mega-donors known for backing conservative and libertarian causes. “I’m concerned he’d be a President that the Kochs would own,” Bannon [ Steve Bannon ] said.

You can read the full profile here [https://www.newyorker.com/magazine/2017/10/23/the-danger-of-president-pence ].

The aforementioned “bait and hook” headlines covered what is known in the realm of guerrilla journalism as a “hatchet job” chopping-away at ‘Steve Bannon’, believed by many insiders, to be conducting a unique Executive Branch clandestine ‘political intelligence’ operation on behalf of President Trump.

If people look close enough, by reviewing the aforementioned, readily seen is just ‘how fake information baiting’ exercises ‘disinformation hooks hidden in plain sight’ of thousands of newspaper and magazine media headlines; not only throughout this year ( 2017 ) and even earlier ( 2016 ) – insofaras Donald Trump.

Important for people, whom do ‘not place enough time away-from daily distractions, to begin recognizing just ‘how simple it really is to self-discern / self-decipher bits and pieces of information for themself’ in order to know the difference between ‘what is correct information’ – worthy of their full time and attention – versus ‘what information is only an illusion’, i.e. ‘fake’ / ‘false’, today.

A distinction exists between which socio-economic global event circumstance wreaks havoc first upon all the little people populating Earth today.

We know ( full-well ) that amidst other’s eyes, we are but tiny insects – easily squished out-of existence in a blink, “They” will never know what became of those whom shall exist hidden amongst statistics, shall prevail in spite-of adversities on the horizon.

Hopefully, this report and my research reference links ( listed further below ) may serve to provide a more in-depth, accurate, brief and concise picture for many more people’s even-better knowledgeability.

After your review let me know your opinion by e-mailing me directly, at: UnwantedPublicity@GMAIL.Com

Let those you know about this report by your simply ‘clicking on any of the little square colorful “Share” boxes ( found at the top of this page ).

Your donations ( no matter how small or large ) are welcomed, here: www.paypal.me/UpiGuy