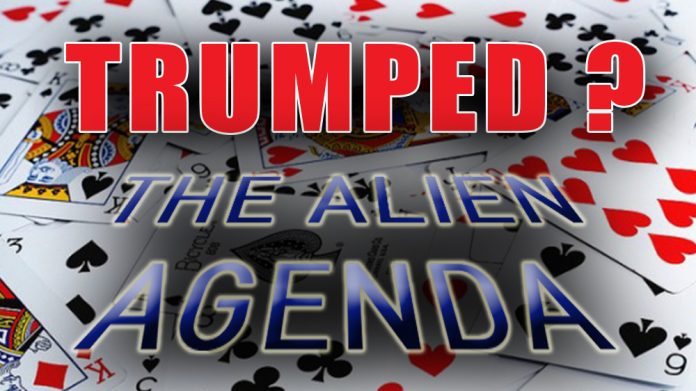 Article by Kerry Lynn Cassidy
Definition:  TRUMP (in cards):  (in bridge, whist, and similar card games) a playing card of the suit chosen to rank above the others, which can win a trick where a card of a different suit has been led.

For what it’s worth apparently Dan Burisch and the revelations from the Looking Glass several years ago, shared with us, was wrong with regard to the outcome of the election.  They were right in that Hillary did indeed run in 2016 but she did not win.  What then should we deduce from this?

For one thing, it has been noted by many that timelines may have substantially changed from that time (2008).  In fact, the evidence seems to point to a manipulation of the timelines by CERN (among other endeavors) that are sometimes called the “Mandela Effect”.  This version of reality might be seen to have been manipulated to turn out differently than that previously revealed by the ET technology called “Looking Glass” (assuming Burisch and McDowell were being truthful when they told us that Hillary would run and win in 2016.  At which point there would be an attempt on her life and she might die but wanted to run anyway).  So what has changed?

We do know that Trump was in the news as having pledged to breathe new life into the Naval ship building industriy for one thing.  This indicates the possibility that the Navy side of the secret space program is behind Trump’s election.  We know there is a substantial split (and maybe several warring factions at the top) of the secret government/secret space program.  One side, now fighting on behalf of humanity and against the rise of fascism in America.  And the other, epitomized by the Bush cabal (which includes the Clintons and Obama) George Soros and the Rothschilds also known as the Luciferian Rebellion.  From what we know of this split, a portion of the Navy (deep insiders) are working quietly to among other things, remove the Grey alien/ Reptilian infiltration from Earth and to remove their control over the secret space / secret government.

Where does Trump fit into all of this?  It’s unclear.  We know now that the Simpsons cartoon apparently predicted a Trump presidency back in 2000.  So the next question one might ask is whether the writer/producers of The Simpsons are given tidbits from Looking Glass by a military insider, a lot like information reportedly to have been fed to Chris Carter and revealed in episodes of THE X-FILES.  I for one do not see the number of accurate predictions by THE SIMPSONS as a “coincidence”.

If you take this bit of data in mind then this is at least one clue that PLANNING for a possible TRUMP PRESIDENCY could have been in place as far back as 2000.  This could alter ones perception (seemingly popular at this time) that “the people” have spoken in this recent election.  Something I find highly unlikely.

For one thing the amount of outrage and cries of the election being rigged prior to the vote was rampant and of course TRUMP himself claimed this multiple times in public.  Now that he’s won, you have to find it somewhat amusing that those very people who were so sure the election would be rigged (with good reason) are actually trying to back track or claim that the “system” suddenly righted itself due to the overwhelming desire of the people.  For me, this doesn’t fly.  In fact, the system is as corrupt today as it was yesterday.  So what is going on?

From my perspective, nothing that goes on in politics or on the surface of Planet Earth today can be considered without considering the vast alien intervention, involvement and interaction within it all.  We are, as I have said many times, boots on the ground for various ET races (as well as those in inner Earth such as the Agarthan’s (likely related to the Pleiadians) and others.  As my five interviews with whistleblower, Captain Mark Richards, from the U.S. Secret Space Program, have demonstrated, our wars are ET/Intra/Inter dimensional wars that we inherited from our predecessors.  With this expanded understanding one must view this American election from a different vantage point.

The first question one might ask is who is Trump working for?  In other words, what ET on and off planet race or races (regardless of whether he is consciously aware of it or not at this juncture) is he aligned with?  And looking for clues among those he ultimately chooses as cabinet members and who his friends are etc can give us some idea of this.  His bloodline connection is also key:  Mother is Scottish and Father is German… And so on.

We do know there is ample evidence that the dark side (currently in control of the U.S.) has substantial ties to the Paperclip Nazis brought over after WWII.  And so, it behooves us to examine where Trump’s allies are and who influences or even controls him.

Actions do speak louder than words and for example, in Obama’s case, the actions were contrary to the words on so many issues that at this point everyone is aware of who runs him and his affiliations.  Was he ever as well intentioned as his rhetoric?  Probably not.  But no doubt pressure was also brought to bear.

The Reptilian Agenda at the Vatican

In the case of Trump one has to wonder if he will be given the presidential tour ala the BILL HICKS joke of being shown into a conference room, told to sit down and watch a film of the real Kennedy assassination (unedited) and then asked “Any questions” at the end.  Many think this is not too far from what actually happens.  Some claim that Trump when given that screening may throw caution to the wind and go mano-mano with them with the predicted result.  Some are even saying this is actually ‘the plan’ and his VP is really the ‘designated survivor’.

Of course, anyone researching the secret government secret space programs knows by now that Presidents aren’t always “read in” up to the highest level of secrecy simply because they only are around 4-8 years and have no real power.  They are figure heads for the PR campaign we call ‘the news’ and a cover for what is done behind the scenes.  This is most likely the case.

And that being the case, keeping in mind the last time a President tried to ‘go off the reservation’ was President Kennedy, where do we go from here?  Do the people really ‘have a vote’ in America or anywhere in the world at this time?  Does the surveillance society Snowden reveals (just the tip of the iceberg according to Camelot whistleblower, Jake Simpson and others) indicate there is a completely other world operating above and below the world of surface politics and intrigue you hear about in the wholly owned lap dogs, the mainstream press?  No doubt.  Ask yourself whether that secret government is really already a New World Order and then take another look at this latest “free election” in America.

We know there is a not-so-hidden-resistance led by some humans and some ET races who are fighting for all of humanity and our survival here on and off the Planet.  Whether this latest move installing Trump in the Presidency is indicative of a victory on their/our part or not, is yet to be seen.  Regardless, whether this move, like Brexit was something that happened because the better side of “the people” willed it so, is highly questionable based largely on the rigged election process (well documented) and the steady loss of our rights over an increasing number of recent and not so recent, years.

What we can say about now and the future on and off Planet Earth is that this is a spiritual war between groups.  It’s not about individual players except as they represent whatever groups with whom they are aligned.  And the group consciousness is the tell-tale barometer as to where things are headed.  Yes there are positively oriented races supporting the growth of humanity.  On the highest levels well above the 6th dimension the game may be orchestrated and safeguarded.

But tell that to the millions who died in the Nazi concentration camps and wars that continue to this day as well as the over 7 million who, if Mark Richards is right, never made it to Europe as they made their exodus from the Middle East, but instead ended up as food for Reptoids and Greys.  Tell that to the millions of children going missing every year.  And whereas, the journey of souls is a complex one and death is simply a transition from one state of existence to another, awareness and choosing sides in the battle for the right to live free is still a venerable goal.