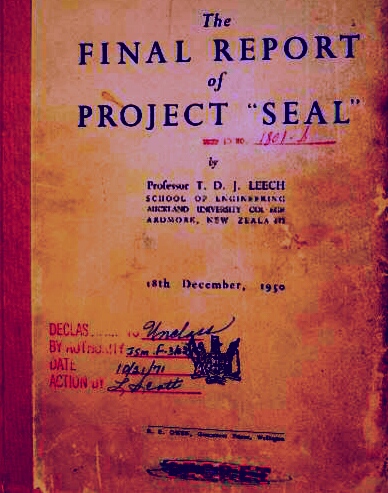 LOS ANGELES – October 19, 2016 – Man-made ‘tsunami bombs’, amidst a June 1944 operation within what became later known as ‘Project Seal’, were U.S. government experiments that took place in New Caledonia and then on the Whangaparaoa Peninsula near Auckland, New Zealand where it was later learned that three thousand seven hundred ( 3,700 ) atomic bombs were detonated during tests revealing that only 1,000,000 pounds of explosives ‘strategically positioned in an array’ only 5-miles from any coastal sea shore would net military desired effects of a ‘man-made tsunami’ targeting shipping ports for a devastating ‘economic impact’ to cripple an entire nation.

Today, nations with nuclear power generating stations in such a path of unconscionable destruction would not only fair worse fates but for a far longer duration over time.

During the 1960s, the former Soviet Union government research institute known as “NII-24” merged in 1969 with the “GSKB-47” becoming Russia’s Research Institute of Applied Hydromechanics ( Kiev, Ukraine ), which in 1977 provided the Russia navy with its super-torpedo “Shkval” ( VA-111 ) an incredibly advanced high-tech weapon capable of tremendous speeds and maneuverability underwater from a ‘man-made gas bubble enveloping this super-torpedo, which packs a nuclear nightmare too.

High speeds of such super-torpedoes are attained by the torpedo creating a ‘cigar shaped gas bubble’ attributable from outward deflections of water from a combination of, its:

These type of super’torpedoes are ‘extremely maneuverable underwater’ by a high-tech speed navigation system that ‘reshapes its protective bubble envelope outside this torpedo, which also uses four ( 4 ) fins skimming the inner surface of the super cavitation envelope of the bubble providing extremely fast course-corrections.

By using a combination of modulated fin ( or, fins ), extended from inside this super-torpedo, the desired turn executions are instantly provided while simultaneously opposing fin(s) can be either ‘extended’ or ‘retracted’ outside the torpedo shell but within the projected bubble of the torpedo further outside.

To make even faster turns, the super-torpedo ‘push plate’ on its ‘nose cone’ can be used in such a way so as-to ‘curve the entire frontal portion of its gaseous bubble’, directionalizing navigation of the torpedo bubblespace for intended travel to target as well as avoidance away-from a variety of obstacles.

The super-torpedo rocket-like engine has an incredibly long-range using a combination of high octane boost kerosene, hydrogen peroxide and more within its propellant tank containing about 750 pounds of highly-developed peroxide and 250 pounds of kerosene.

There are, however even newer high technology super-torpedo arrays indicative of nuclear capabilities displacing concusive explosions undersea designed to displace large bodies of water into a colassal man-made tsunami.

These supercavitation torpedoes are capable of being deployed, out-of:

On October 3, 2016 the Islamic Revolution Guards Corps ( IRGC ) publicly displayed its Super-Torpedo known as the “Hout,” with Russia state-of-the-art high technology capabilities of ‘striking targets outside of water’ too.

Currently, it is understood ‘Iran warships are now being added to the Gulf of Aden’ offshore Yemen precisely where U.S. warships are engaged in assisting Saudi Arabia fighting Iran backed militia installations within Yemen as well as ‘inside Saudi Arabia’ too; the latter of which is ‘why U.S. military ships are now positioning off the coast of Yemen and striking ground-bases there’ , which prompted even more Iran warships into the Gulf of Aden recently.

As for secret ultra-deep undersea weapon activity of the U.S. government, an ‘entirely different’ weapon system may review employment of plasma pulsing geologic strata buried approximately 150 miles south of Accra, Ghana in the Atlantic Ocean, details and color satellite underwater photos of such is for another report.