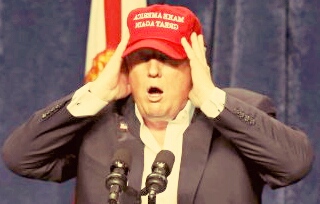 LOS ANGELES – September 24, 2016 – For only American citizens, presented is such a limited choice vote.

Moreover, America hasn’t much to choose from according facts.

Hillary Clinton is only one of the political candidates out-of two ( 2 ) ‘major political parties’, listed amongst minority political parties whom are all campaigning for American citizen votes in the United States Presidential election currently slated on November 2016.

Afterall, who wants to bother with reviewing anything less than ‘the best’ person to lead America, right?

Every human being have their flaws, and even the ‘great I am’ has flaws too so, would anyone pick, to lead their Nation, a person having ‘greater flaws’ than most or ‘lesser flaws’?

Do ‘multiple physical malady flaws’ have any credible bearing as-to a person’s suitability to lead a country through a 4-year term of Presidency for America?

Believe it or not, many people are unaware of ‘national security risk delays’ hampering proper leadership of a country during times of crisis.

How then, could such ever be allowed to get in the way of the U.S. Presidential decision-making process over the ‘health’, ‘safety’, ‘welfare’, and ‘security’ over ‘hundreds of millions of people in America’?

News claims Hillary Clinton as ‘the best America has to offer for national leadership’ so, my only question, is:

“How can America’s mainstream population choose such, in-lieu of the following information ( below )?”:

From seemingly insignificant issues to incredibly worrisome evidence, it is important, to:

‘Never judge a book by its cover’.

We are ‘not an island nation unto only our selves’.

We, the American people all want to see national freedoms remain standing and guided by ‘steadily reliable leadership’ at the helm of our large ship, providing not only security but also providing humanitarian support for those in-need of dire assistance elsewhere, much of which is largely dependent on our National ‘economic ability’ so-as to continue affording to do-so without jeopardizing our national citizenry.

Surgical Peace Instead Of Combat Wars

America was to be a global peacekeeper, not a destroyer of international populations, and war between nations was not meant to kill-off populations as a demented form of sick entertainment’.

Unfortunately, America and other nations have strayed away-from “surgical peace” by embracing ‘targeting population centers’ rather than ‘military and militant encampments’.

A more cost-effective but perhaps, somewhat crude form of global peace may be instituted by simply ‘immobilizing ( ‘not’, killing”! ) all people under seige’ and then ‘surgically extracting individual threats and weapons’ thereby ‘neutralizing combatant threats’ and ‘protecting population innocents’. Imagine a war-like third world warfaring nation ‘temporarily put to sleep’ to effectuate a ‘peaceful solution to war’?

For those having given service to our Nation and whom are now incapacitated for whatever reason(s), we as a people demand persons with severe or chronic medical disabilities immediately receive the best medical care possible so, they can get well and return to a more suitable life’s retirement; in peace – without suffrage.

We as a Nation of people have inherent rights as U.S. citizens to know ‘everything that may serve to one day put us all at grave risk’, and ‘this is the theme for what this report is all about. Citizens concerned for their safety and the safety of their family and loved ones.

Here are these ‘medical talking points’ of concern ( below ):

Slimmer version ( at least 50-pounds skinnier ), leaving 9/11 ceremony, propped-up ( like an adult human doll-like form ) against a Cylindrical Grey Colored Metal Pole; pulled away-from to take 1st step and ‘Buckles At Waistline’, takes 2nd step and a ‘Steel Pin” is kicked to bounce-off ‘lower right leg of pantsuit’, then a 3rd step off curb, and Full Collapse face-first onto side floor area within black medical van:

The Hillary Clones; what some believe actually occurred:

Thanks for ‘consciously’ voting, in November 2016, for what only the American federal government can muster publicly presented.