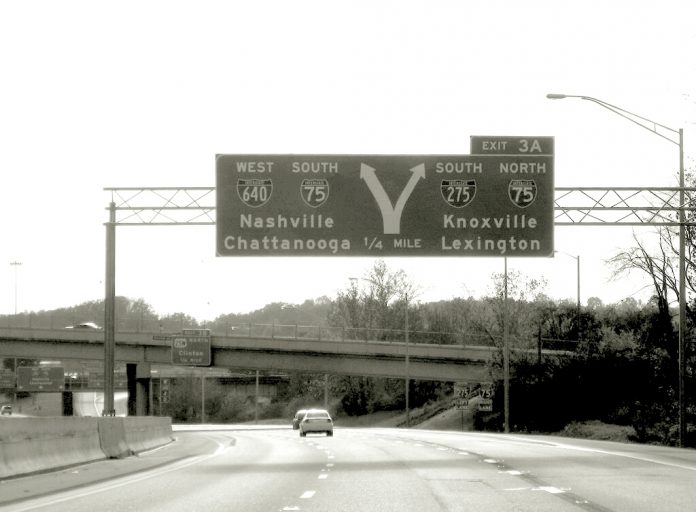 Before noon, on December 9, 2015 the following events took place.

While returning to Southern California from New Hampshire, I was
driving on Interstate 40 westbound just past the road-signs of the
Y-12 Security Complex at the U.S. National Laboratory in Oakridge,
Tennessee when I came upon a ‘Y’ in the road.

More than 1-hour earlier, off on the ‘north’ side of Interstate 40,
were many landmarks, three ( 3 ) of which I recall:

Upon the “Y” in the road ahead, a green grassy knoll dead-ended
Interstate 40 West; splitting into Interstate 640 South ( left ) or
Interstate 75 North ( right ), and because Interstate 40 disappeared,
I choose I-640 exiting the next off-ramp to check my map, and decided
to return back in the ‘opposite direction’ ( north ) whereupon
reaching another “Y,” the choice was continuing ‘straight’ ( ‘north’ )
or going ‘right’ ( should have taken me ‘east’ ).

It was the latter choice that oddly ‘sent me back in time ( over
1-hour ) and all within only 10-minutes’.

10-minutes later, I then ( again ), drove past the same landmarks, but
all on the ‘South-side’:

I saw these aforementioned three ( 3 ) landmarks within only
10-minutes; landmarks previously seen well more than 1-hour earlier on
Interstate 40 ‘West’.

I mistakenly took Interstate 640 South ( also known as ) Interstate 75
South, and then noticed it would have soon taken me ‘East’ by a sign (
ahead ) indicating “Interstate 40 East” so, I decided to quickly exit
the first ( 1st ) offramp, park, and check my location.

How Is This Possible? Where Was I?

First thing I noticed was the Global Positioning System ( GPS )
‘marker’ indicated I was somehow being positioned about 40-miles
‘North’ of I-40, and about 40-miles East of I-75. Physically, I was in
my reality less-than 1-mile ‘South’ of I-40 and only 200-feet West of
I-75. Something was ‘not’ right!

I decided to look at the smartphone satellite map, and saw Interstate
40 continue past Interstate 75, which did ‘not’ happen; for me! Why
not?

When I was forced to drive the I-40 dead-end ‘Y’ into an interstate
ramp split, I calculated possibly being routed ‘south’ on Interstate
640 or ‘north’ on I-75 like a “bypass” rerouting my travel hopefully
back onto I-40 West toward California  No way!

There was ‘no road work’ occurring either.

Although the I-640 sign read ‘South’, I noticed a sign further-south
indicating ‘Interstate 40 East’ so at that point, logic had me
immediately exit the off-ramp and retrace my travel direction by going
back ‘North’, hoping another “bypass” would aim my travel direction
‘west’ because Interstate 40 could ‘not’ simply ‘disappear’. Or, so I
thought!

Logically, retracing my route, driving back ‘north’ on I-640 / I-75
North would give me an opportunity to get back on the correct
direction. I was wrong!

According to the I-640 / I-75 North ‘sign’ while heading back toward
the green grassy knoll where I-40 West seemed to disappear, I saw yet
another “Y” ‘again’, and to the ‘right’ the interstate sign indicated
“Interstate 40 West,” however the road physically navigated traffic
‘East’ even though the ‘interstate sign’ indicated “West.”

While on this curious geophysical routing of ‘Interstate 40 West’ ( as
the curious sign indicated ), within only ’10-minutes’ I ‘again’ saw
the ‘same exact roadside landmarks’ ( off-of Interstate 40, ‘all’
physically positioned on the ‘Right-side’ of I-40 I was also
physically driving on ).

Landmarks I saw over 1-hour beforehand ( while earlier driving I-40
West the 1st time! ), these three ( 3 ) landmarks were now positioned
on the ‘South-side’ of Interstate 40 ‘not’ the ‘North-side’.

When I drove past the third ( 3rd ) landmark ‘again’, I began doubting
my own sanity. I was not enebreated. It was daylight. The weather was
‘clear’. I was a highly trained navigator planning wars.

What possibly could have gone so wrong that such odd incidents were
‘occurring repetitively’ for me?

I considered the Oakridge Tennessee U.S. National Laboratory Y-12
Security Complex ‘possibly’ having ‘added’ something ( an underground
high-energy particle accelerator – like CERN – that might be bending
the space-time continuum ), but quickly shrugged it off as utterly
ridiculous.

The hardest part was, keeping that silly notion from creeping back
into my thoughts.

The only thing I held onto was concentrating on continuing to drive
out-of this ‘time slip event’ before I ran out of fuel; becaming
stranded.

How could I travel on an interstate ‘physically positioned’ to route
me ‘east’ when the ‘sign’ read “west”?

Even more odd was, how could such take me back in-time ‘east’ but aim me ‘west’?

It was broad daylight, I was wide awake, feeling fine, until this
event began to sink-in to my mind that I might have entered some type
of Twlight Zone that was really happening to me, which I might never
escape from back to where things were normal.

What was odd about my first approaching the “Y” was seeing a large
green grassy knoll ( I could not see beyond it as it blocked
ground-vision ) as it was oddly positioned like an angular natural
wall between the interstate “Y.”

If I had previously travelled ‘right’ I would have gone ‘north’ ( off
my course, which would have put me onto Interstate 75 North ).

Instead, I travelled ‘left’ at that “Y” and ‘that route’ took me
‘south’ getting off at the next off-ramp to study my map to determine
how Intetstate 40 could come to an end just in-front-of the green
grassy knoll that the interstate “Y” routing me to either side of;
‘left took me south’ and ‘right would have taken me north’.

Did I get lost? If so, ‘how’? But, all the questions racing through my
mind gave-way to a basic fundamental matter of my ‘scared-willingness
to survive’ this crazy ordeal.

Coming back, away-from the off-ramp I stopped-at to check my map, I
drove on-to Interstate 75 North, to physically travel ‘west’, and
there was that grassy knoll ( now positioned to my left-side up ahead
) so, the only places to drive was either continue going ‘north’ or go
to the ‘right’ at which point I noticed traffic was physically
directed ‘East’ even-though the ‘interstate sign’ read “Interstate 40
West.”

Since I ‘needed to travel’ “west” I remained on this right-curve
Interstate 40 transition ramp where within 10-minutes I began
recognizing landmarks I had seen well over 1-hour earlier while I was
originally travelling ‘west’.

How can I physically travel on a road headed back ‘east’ from where I
had travelled over 1-hour previously and do it only within 10-minutes
and then re-see ‘all 3’ landmarks I saw much earlier off-of the
interstate when driving ‘west’?

Something was terribly wrong.

I then checked my gasoline station fill-up receipt, which indicated:

After ‘re-seeing’ the ‘third’ ( 3rd ) landmark ‘again’, a feeling of
extreme worry flooded through me with thoughts of:

“What happens if I see that green grassy knoll again where Interstate
40 West dead-ended for me before? Can I break out-of this
‘locked-in-time cycle of events’? How was I trapped in all this?”

The most significantly odd part of my journey was, I never saw that
“Y” for I-640 ever again, plus the fact my return to where I was (
east, but driving west ) all occurred within a time span of only
10-minutes, which previously took me well over 1-hour to drive earlier
while originally travelling ‘west’.

Thankfully, Interstate 40 continued “West” and that dead-end grassy
knoll never reappeared again, and I arrived safely back in Southern
California.

If anyone reading this ever experienced a similar roadway driving
event such as this I would enjoy hearing from you.