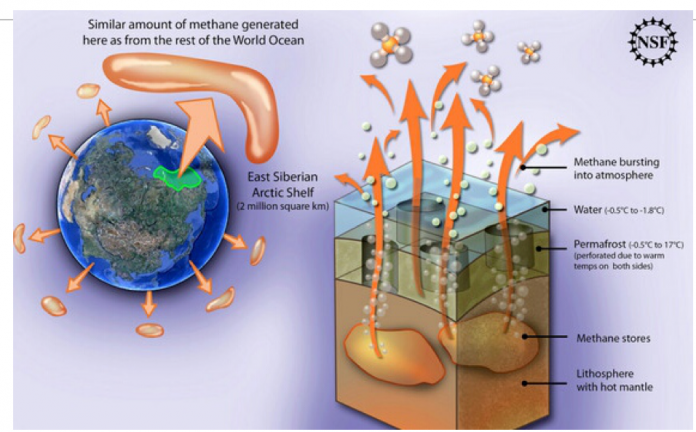 First, we needed to understand what was has been happening to Earth to see just what “activated” this new environmental click-ticking time bomb:

[ 1ST NOTE: If you’re in a hurry to simply find out quickly, you can always return to the detailed information ( immediately below ), by just scrolling down ( past all the text content ) to only where the ‘color video clip’ link ( “Research Reference” ) is located. ]

Since December 2004, planet Earth has been convulsing from increased bombardments of Cerenkov / Cherenkov light radiation ( a special ‘atomic’ particle of the “photon” family ) when a highly unusual companion “multimessenger” astroparticle of the “neutrino” family – five ( 5 ) of which has one ( 1 ) known as a “muon” that was discovered as ‘impossibly tagging along’ to later become known as “Cherenkov muon light radiation” possessing both ‘highly penetrable’ problems ( burrowing through Earth’s core dynamo ), plus ‘highly destructive’ problems ( ‘extinguishing oxygen molecules’ ), which if ever the Earth became bombarded enough can ‘over-excite’ Earth’s core dynamo that sustains Earth’s Magnetosphere ‘shielding’ from our star’s ( Sun ) harmful to health “gamma-rays,” plus that over-excitement of Earth core liquid molten magmatics could consequently move outer core ‘floating islands of magma’ toward their point of least resistance, making them flow swiftly outward and upward through Earth forcing more magma through a labyrinth of thousands of miles long “lava tubes” leading to ‘yet other points of least resistance’ to Earth crust continental plates riddled with volcanoes – those deep under seas and lakes as well as above sea-level – land areas that will be moved as well as move ‘us’ from sudden ground upliftings ( i.e. “rifts” ) and consequential fault zone ground surface shocks ( “earthquakes” ).

What ‘Happened Recently’, Will Happen Again

During July 2012, it was finally discovered that the December 26, 2004 Andaman-Sumatra Indonesia tsunami that killed over 350,000 people in 1-day stemmed from an ultra-deep sea earthquake caused within 48-hours earlier by a large group of Cherenkov-muon light particles having invisibly ( to human eyes ) burned a massive hole through Earth’s ozone layer ( above the Coral Sea ) and continued through Earth’s inner core overly-excited so greatly that it cracked the Indian continental plate in the Far West Pacific under the Andaman Sea.

Cherenkov-muon light radiation is now being hypothesized as having penetrated the additional giant hole ( the same size as Earth ) within Earth’s Magnetosphere, leaving wide open Arctic ( North Pole ) vulnerabilities that have caused rapid increases in glacial ice melt plus the recent total Arctic Sea melt last Summer ( 2014 ) where such is still proceeding to continue dramatic sea-level rise, rising ocean temperatures, and volatile atmospheric weather pattern changes, and Earth magnetic anomalies too, which for highly-learned geoastrophysicists, geologists, volcanologists, seismologists, scientists and more are screaming ‘doom’, however to-date none of the aforementioned findings have been detailed by the mainstream news media in general public broadcasts to billions of people whom unwittingly remain unaware.

There are such massive reserves of methane in the subsea Arctic methane hydrates, that if only a few percent of them are disassociated, they will lead to a jump in the average temperature of the Earth’s atmosphere by 10° C and produce a “Permian” style major extinction event which will kill us all.

The whole northern hemisphere is now covered by a thickening atmospheric methane global warming veil that is spreading southwards at about 1 kilometer per day and it already totally envelopes the United States.

A ‘giant hole in the equatorial ozone layer’ has also been discovered ‘in the west Pacific Ocean’ which acts like ‘an elevator transferring methane from lower altitudes to the stratosphere’ where it already forms a dense equatorial global warming stratospheric band that is ‘spreading into the Polar regions’.

We have perhaps, ‘finally figured it out’, and we’re about to behold what some believe ‘begins unfolding’ ( September 23, 2015 ) shortly later.

The public ’emergency’ that many ‘sense’, but so far have been unable to more precisely identify, may already be at-hand where others might add – be that as it may – government storm trooper’s “hands” on us as the ‘little people’.

The following 23-minute video clip ( further below ) is of ‘official production’ ( 2014 ), which surrounds an event already occurring, which no mainstream news media broadcasts have mentioned.

The “emergency” involves a “50 GigaTon” quantity ‘release’ of “methane” into from the Arctic Circle ( North Pole ) region, which official experts indicate within the next 20-years will severely impact global food supplies for population centers worldwide.

We conclude that continued high emissions will make multi-meter sea level rise practically unavoidable and likely to occur this century. Social disruption and economic consequences of such large sea level rise could be devastating. It is not difficult to imagine that conflicts arising from forced migrations and economic collapse might make the planet ungovernable, threatening the fabric of civilization.

An ‘upcoming significant food shortage’ ( in and of itself ) is enough to institute a ‘global climate impact emergency’ so, it is now believed the United States of America government is about to take active steps to implement an ‘early example’ of “national population relocations,” ‘corralling’ of ‘displaced people’ ( “refugees” ) that other World governments will be following.

Foreign officials ( Prime Minister of France ), and other domestic officials have warned and / pointed to what some have said ‘publicly’ being “Climate Chaos” ‘due to strike’ around “September 23, 2015” yet ‘never really detailed what they meant to people’.

There are those whom know what the future holds for global population centers based on the following information, which everyone just might want to pay very close attention to:

Once the U.S. government acts on its own population centers, by example other countries will follow.

During August 2015, British military soldiers stationed at a U.S. military facility near Albuquerque, New Mexico warned, that: “Americans will wish they were ‘not’ Americans” – residing within the territory of “CONUS.”

In the Last Ice age, the methane seal system ( methane hydrate pingos ) was maintained by the low temperatures and trapped the mantle methane below the ground. Now however human pollution which caused a massive carbon dioxide atmospheric buildup exceeding 400 ppm has ‘started to break the seals on the mantle methane fractures in 2014 and 2015’ allowing them to spew increasingly large quantities of deep mantle methane directly into the Arctic atmosphere.

In the Late Permian, the massive volume of carbon dioxide released into the atmosphere during these cataclysmic eruptions produced extreme global warming in the air and oceans which also dissasocciated the Paleo-Arctic permafrost and subsea methane hydrates ‘and the methane hydrate seals’ above the “Enrico Pv Anomaly” ‘generating a massive seafloor and mantle methane pulse into the atmosphere that caused the Major Late Permian Extinction Event’.

Quick ‘research reading’ is provided with a few ‘download documents’ for your even-further knowledgeability so, be sure to ‘click on the red colored text word links’ ( below the “END” of this page ).

[ NOTE: If you enjoyed reviewing the UPI Guy Blog column report, please send your support to him, at: UnwantedPublicity@GMAIL.Com Should you decide to offer any ‘small’ or ‘large’ donation seeing his reports continue for public benefit, simply type in your e-mail “Subject:” line, the words: ” HELP OFFER ” and ‘easy instructions’ will be sent back to you. Thank You! ]