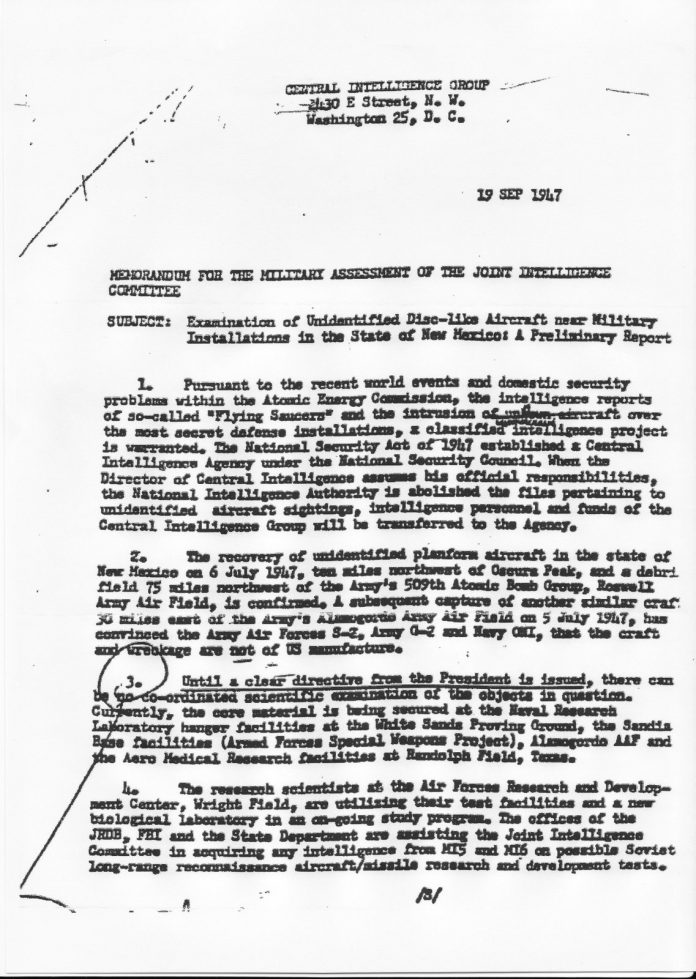 mainstream news media ( see reference below ) reports now has the

the Condon Committee discontinued ( December 17, 1969 ) has now been

released – a broadcast circulating worldwide without any proper

What Was Released? Above Top Secret? Unsanitized? What?

Files analyzed and held by the U.S. Department Of Defense

Documentation Center For Scientific And Technical Information at

“Confidential” were downgraded on May 1, 1967 to “Unclassified” and

The fact is, people are a whole lot smarter today, and to such a

degree they would ‘never buy another Project Blue Book from their

government’ since it contained ‘nothing’ on the 1947 UFO near Roswell,

“The National Archives has been unable to locate any documentation

A publication entitled “The Roswell Report: Fact vs. Fiction in the

National Archives, the ‘only officially recognized public record’ in

The U.S. government has done a great job using your taxpayer monies

over 70-years doing absolutely nothing more than leaving taxpayers a

foundation museum they’re convinced you might be interested-in when

“Because of the considerable cost to the Air Force in the past, and

the tight funding of Air Force needs today, there is no likelihood the

Office of Special Investigations ( OSI ), originally under the U.S.

Secretary of the Air Force, when the U.S. Department Of Homeland

Security ( DHS ) was ‘decentralized’ into ‘sections’ within each and

every U.S. government federal organization where today even DHS has

its own OSI too.

‘excluding names of people involved in the sightings’, are ‘the only

thing now available for research’ in the National Archives Building.

These ‘sanitized records’, include approximately:

– 37 cubic feet of case files in which individual sightings are

– 3 cubic feet of records relating to the Office of Special

Investigations ( OSI ) – portions of which are arranged

chronologically, according to respective OSI districts, and by

Search aids, for the aforementioned records, include only a:

– Index List for individual sightings by date and location.

Access to BLUE BOOK text records is by means, of:

The first ( 1st ) microfilm roll, includes a List of Contents, for all:

Amidst text records, ‘photographs were microfilmed separately’ and are

– Sound Recordings; and some,

Where Do ‘We The People’ Go From Here?

People have just witnessed how government took billions of taxpayer

absolute nonsense programs and projects; yet another America national

If no one contributes, nothing worthwhile will ever be made available

for people to rely on because government never provides any ‘real’

“service” for citizens who continue paying for absolutely nothing.

disappearing for over 70-years, precisely ‘what’ programs and projects

for over 70-years government did with it, and ‘where’ people can

Most awaken to enlightenment of risk-taking impossible missions by a

certainties were it not for Whistleblower disclosures.

The Unwanted Publicity Intelligence Guy ( Paul Collin ) is in very

desperate financial straits … He need your help.  All his private

intelligence websites were taken down after government threats.

‘counterfeited’ then promoted as ‘real’ by international fraudsters

working for government intelligence to extract information from

researcher having collected tons of intelligence on a variety of

In 2014, his most recent intelligence collection was completed from

transactions involving notable people, plus much-much more ) most of

For the past 9-years now, he has been homeless and has been living in

his van home-office that suffered serious vandalism and needs repairs.

In a perfectly normal world, he needs a base of operations to work

by donating directly to him … You can contact him, at:

UnwantedPublicity@Gmail.Com – Be sure to type “HELP OFFER” in your