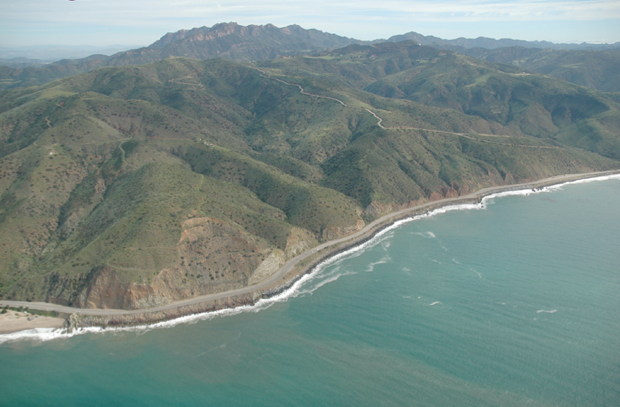 LOS ANGELES – August 22, 2014 – North of Malibu, California where Deer Canyon Road meets the Pacific Coast Highway ( PCH / State of California Route 1 ), about 3.2 miles from the sandy shore out in-to the Pacific Ocean, Google Map once displayed ( ‘now no longer visible’, as-of August 19, 2014 ) a semi-rotund oceanic plateau concluding to a cliff supported by multiple recessed columnar structures spaced apart in such a fashion as to provide the darkened shadowy appearance of what looked like ‘multiple giant exit and entrance passageways’ as pointed-out by an individual claiming yet another person named “Maxwell” believed these to be an “underwater entrance” for submarine vehicles and/or Unidentified Submergible Objects ( USO ).

Now that Google Map underwater display image has not so mysteriously disappeared as it has been ‘covered-up’; hidden from public view’ and, replaced by what clearly shows a crudely ‘spliced-in overlay image’ today. What were they ‘thinking’? That somehow no one would notice the change ‘after the original image was plastered all over the internet’?

Clandestine maneuvers, such as ‘this case instance’ plus others seen perpetrated on the global public, by Google using its affiliate U.S. government ‘high paid security guard organizations’ ( paid for by ‘tax paying people’ ) are purposely dumbing-down the global public whose otherwise ‘natural knowledgeability of the truth is under attack’.

The People of this world refuse to tolerate ‘falsification of natural truth’, and by ‘rejecting corporate products promoting false knowledgeability’, will ‘collapse false profits of each stockholder’ until ‘worldwide big corporations come onto compliance with truth for public benefit’.

Alternative measures to Google Government propaganda exists in other internet browsers, search engines, and ‘language translation tools’. Come on people, if you cannot trust a simple ‘image map’ do you really want to trust the same company’s ‘language translator’ in your ‘work’ or ‘personal relationships’?

Think about what your hard earned tax monies are being spent on by your government. Are you going to continue paying for public servants and subsidized corporations ti continue lying to you, your loved ones, or your emplorers?

Get yourself out from under and away-from the rule of the corporate-led governments you keep financially supporting.

Inking your next official into public office, sees the vast majority who leave early eventually become employed by the corporations they served your taxpayer contracts and subsidies to.