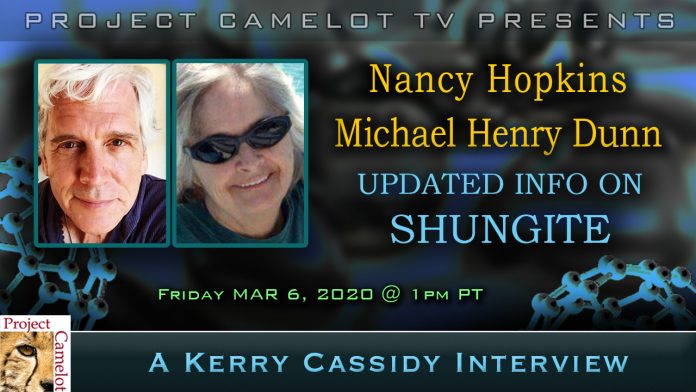 This video was done to focus on the meteor hit in the area of Russia containing the 800 miles of Shungite.  More research needs to be done to verify claims.

My comment: I do not subscribe to the blanket statement that the meteor has lifted the Shungite energetics.. in theory, they didn’t need lifting! More research needs to be done. My intuition says something else is going on here and it is not entirely positive. It does not necessarily help to urge humanity to focus on some “savior stone” when all the power and healing we need is within us! –Kerry Cassidy

“…Two weeks ago a blue meteorite exploded directly over the 800 square miles of the Shungite deposit that had arrived 2.5 billion years ago carrying a carbon composite that left nuggets, rocks, boulders and compact areas 200-400 feet deep.”–excerpt from Nancy Hopkins bio below

See bio and more info below….

Nancy Hopkins is a researcher, author, internet radio host, producer and owner of Cosmic Reality Radio. Since May 2014 Nancy and her team have investigated Shungite’s abilities to detoxify water, air and soil; and its ability to transform electromagnetic radiation, such as electric and WiFi signals, to make them “biocompatible” with life. Out of this research came Shungite products enabling people to easily access Shungite’s abilities to promote healing and health.

Nancy’s current book SHUNGITE REALITY relates the story of how Shungite’s seemingly magical attributes evolved into an understanding of Enerology – which is the study of energy. The profound understanding of the interrelationship of all that exists within this biosphere we call Earth, takes the Shungite story into realms of science including Metaphysics and Quantum Physics.

Two weeks ago a blue meteorite exploded directly over the 800 square miles of the Shungite deposit that had arrived 2.5 billion years ago carrying a carbon composite that left nuggets, rocks, boulders and compact areas 200-400 feet deep. What are the odds of two meteorites hitting exactly the same location? This coincidental event was surrounded by other synchronicities that lead to the conclusion a new energy has been integrated into the World Grid.

As a member of Self-Realization Fellowship, he has practiced meditation for some 30 years, leading meditation and chants at spiritual centers worldwide – stories woven into his book, “Romancing the Divine – The Art and Science of Falling in Love with God.”

​A recognized authority on the Shakespeare authorship, he has lectured at universities in the US and Europe on Elizabethan literature and history.

As a composer and vocalist, he has recorded two highly praised albums of devotional Yoga chant in the kirtan style of India.

Embracing Sacred Activism as his credo, Michael is currently a leading spokesman for the establishment of a new global court of human rights.

​Recognizing the urgent need for a revival of the spirit of Chivalry expressed in Sacred Activism, Michael lectures publicly worldwide on Sacred Activism, human rights, and the restoration of the Code of Chivalry. Joining forces with author, Shungite authority, and radio host, Nancy L. Hopkins, he has recently launched Radio 5G to help awaken the public to the lethal risks of the global roll-out of the 5G network.