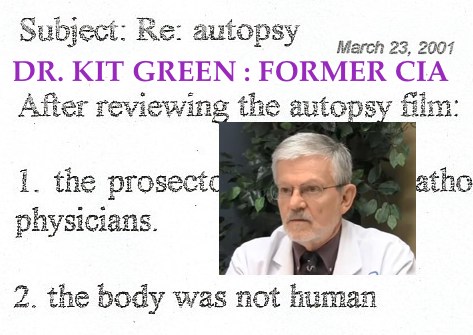 Update July 26:  I was banned from the AboveTopSecret.com Forum for this post… my first and only post.  Guess I hit a nerve….

The Alien Autopsy is a case in point.  As I write this former CIA officer, Kit Green has changed his story.  Is any CIA agent ever really retired? Most would say no.  But while we wait for the release of his recent interview (this is July 2019) with Rich Dolan we now understand:

We are left with the strange sense that this guy is now LYING… And the question is why?  How can he even keep a straight face and tell a lie such as this that completely contradicts his key reported findings back in 2001?

One thing notable here is that we have now been waiting 1 week, since Rich Dolan’s “announcement” that he had conducted an interview with Kit Green and although there was a “misunderstanding” on the format and how it would be released.  And still no transcript.  How hard can it be?

The obvious thing is that somehow, Kit Green went out on a limb, and said more than he was authorized to say and now they are doing catch up trying to figure out how to backpedal from a real piece of disclosure or at the very least something that would reveal some truth they don’t want out there.  That truth certainly is not the fact that Kit Green has changed his mind and now thinks the entity being dissected in the alien autopsy is not an alien but a human with a disease.

Now, why don’t I buy that?   Sounds a little bit like the earlier history of the Alien Autopsy where first Santilli claimed he hired a guy named Melaris to fake the whole thing even though he supposedly had been given real film from a cameraman.

According to researcher, Colin Woolford, who states:

…”Santilli made his original claims and showed the footage in 1995 then changed his story to a recreation in 2006 claiming John Humphreys made the alien. Spyros Melaris came forward in 2007 saying that it was all a hoax and again dropped Humphreys name as making the alien bodies.”–Colin Woolford

Melaris claims publicly just recently, that he faked the whole thing and there was no actual real footage at all, never, not ever.  It was all a hoax!

You can’t make this stuff up.  Fast forward to today.  Kit is now admitting the email trail from 2001 is really real and he wrote those emails.  And that back then he claimed that to the best of his knowledge the footage was real, the body was not human and the procedures were understandable from a 1940’s perspective.

But now he is changing his story.  Why?  Because this is all about disclosure and because as an employee of the government (secret government/secret space program) he is under orders to keep it all secret until well until they get the green light.  And that has not happened.  Yet.

But meanwhile, we are faced with a conundrum.  Why is this guy changing his story?  And add to that the fact that ROGER LEIR another doctor famous for his astute and vast experience investigating ET encounters, implants and removing implants, not to mention filming aliens (see the Varginha incident) (Link to Roger Leir’s testimony at Citizens Hearing on Disclosure.)…. Also stated to his best medical knowledge… the body was NOT HUMAN and the autopsy was real.  What is seriously going on here?

Wrap into this analysis the following:  We did go to the moon but we had help (see my 3 hour interview with William Tompkins) and on top of that Stanely Kubrick was hired to FAKE the footage to cover what they could not show the public they really shot on camera which is a reptilian greeting party when they landed  and I’m sure things went south from there….

So here we have another instance of FAKED FOOTAGE duplicating the real thing.  Some say mixed with the real footage.  Who knows maybe the NASA moon footage is also a combo deal of real and faked just to give it the sheen of authenticity… Makes sense.

Now back to the big question.  WHY is KIT GREEN LYING or is he?  The thing is that the people that work for secret space/secret government firmly believe (and have taken an oath) not to reveal the truth under pain of death and so on.  They believe that they are SERVING THEIR COUNTRY and their dedication and loyalty is to that.  And so if necessary they will sell their first born into the super soldier program (for example) rather than break their security oath.  With good reason.

Added note:  there is always the chance that Kit Green (as one of the key doctors involved in Remote Viewing and mind control) has had his mind wiped and is mind-controlled to believe this new story…but this seems unlikely under the circumstances.

Their lives, their families lives and their friends (if it comes to that) lives are all dependent on the fact that they must under pain of death or worse, stand by their oath.

Keep in mind the SECRET SPACE PROGRAM/ SECRET GOVERNMENT IS a team, a click, a coven (in every respect of the word) and a hu-rah old boys network that every member has sworn to uphold against all odds.

So fast-forward to some kind of accidental release of documents (not so accidental) because like the Admiral Wilson documents these documents came from the same source to the same source, an Australian researcher, space-buff and sometime ufologist named James Rigney.

What is also paramount to keep in mind is there is a split at the top.  Some want “a form of” disclosure and some want the status quo.

This dilemma Kit Green and now Rich Dolan find themselves right in the middle of… What is sad is that no doubt Rich Dolan (who values his status as the go-to guy for the release of documents related to disclosure) is not going to rock the boat by calling a spade a spade and accusing Kit Green of a two-faced lie… but I will.  I am not a kiss-ass.  Needless to say.

And so I will challenge Kit Green here and now, and his cohorts at To the Stars.  Sure you think our National Security, screw that, our welfare on Earth is dependent upon you kissing ass and playing the party line.  But I don’t buy it.

Because whether you like it or not this story is bigger than any of you.  Regardless of your little niche power position.

The sad truth is that the truth favors the young and the Earth to come and lies and obfuscations will not change that one iota.

ADDENDUM TO THE ABOVE:

There’s always the option that back in the day, Kit Green was lying to Eric Davis and Bob Bigelow and the rest saying the body was “not human” and not explaining further that it is a biological ROBOT… OR ANDROID.  (Like the Nazca aliens…for example).

Added note:  I am in contact with both Ray Santilli and Spyros Melaris.  See my analysis as I wrote to Spyros on twitter today below….  I have invited both of them on my show.  I will also be inviting Kit Green on my show…

As mentioned in my recent update of July 12th, another set of documents from the same source (James Rigney from Australia) who declines to be interviewed on the subject, those documents have now come forward in a big way because Green has now confirmed to researcher/author Rich Dolan that the documents are real.  Apparently Green has spoken to Dolan and Dolan is releasing some transcription of that discussion (but not a video interview) soon.

Kit Green, who I chatted with very briefly many years ago, good friend of Pandolfi and Puthoff, is validating the leak that happened back in June of some of his emails related to his take on the alien autopsy….

See the attached entire document released in June where SANTILLI and the autopsy film are discussed.

On another note, I did an update here and it is worth watching as it relates to these players with a brief mention of the Alien Autopsy issue for which I received a Youtube copyright complaint filed against me by filmmaker Sypros Melaris.

I posted the following Twitter message to Spyros today: