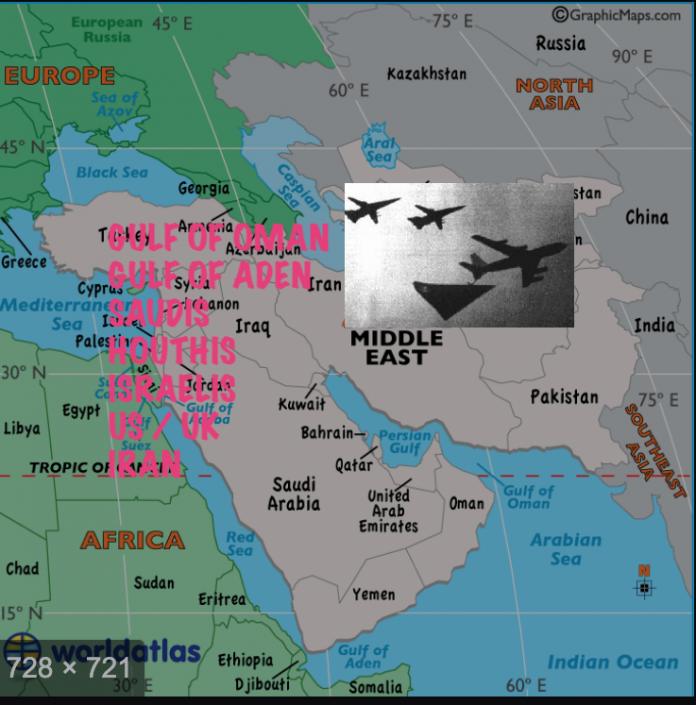 UFOS OVER SHIPS IN GULF OF OMAN just prior to the attack on the Japanese ship Kokuka Courageus very likely come from the Stargate discovered in Gulf of Aden off the coast of Yemen. And/or they belong to the U.S. and are a show of force to the Japanese… to demonstrate that the coming war with Iran is a war with China and the Japanese better come on side with us…

The coincidence of the attack on a Japanese vessel…at the same time that the Japanese Prime Minister is in a meeting with the Iranian leader… indicates that the U.S. is throwing down the gauntlet to Japan to get them on board with the program.

The program being, war with Iran is the doorway to war with China.  This has been planned since the early days of Project Camelot.  We had word from both Henry Deacon/Arthur Neumann that this was the plan from the beginning.  War with China was on the agenda… and then Dan Burisch seconded the notion… The fact is, China needs to get rid of lots of people and war is the easiest way to do this…

It also gives both sides a chance to demonstrate their weapons and superiority.

On further consideration, I would say those ships were carrying weapons headed for Yemen to gear up for the coming war with Iran.  The weapons were meant to arm the Yemenis in prep for war involving Saudi Arabia and Iran.  Saudi Arabia is aligned with Israel as is the U.S.  The Yemenis appear to be the bird dog of the U.S… Set up as the Manchurian candidate to spark a war with Iran.

The ships were only damaged because the weapons they carry belong to the U.S. or Israel and all they wanted to do was make a point… not sink the weapons.  They are likely confiscating the weapons o those ships as we speak. So the attacks were more cosmetic than aimed at demolishing the ships which points to a kind of warning shot across the bow…

It is also significant that the ship supposedly carrying 75,000 tonnes of naphtha — a flammable hydrocarbon mixture… though hit with somethng., a missile or a torpedo did not blow sky high instead it was evacuated…However, where is the film of the crews of both ships being evacuated?

The attacks on Saudi Arabia by the Houthis drones come as a reaction to the drone attacks by Saudi Arabia on Yemen.  Now a Yemen drone has attacked and downed a U.S. drone!

This begins to look like a conflict involving Saudi Arabia, Yemen, the U.S. and a group of ETs coming through the Aden stargate.

Aaron McCollum reporting on Stargate in Gulf of Aden