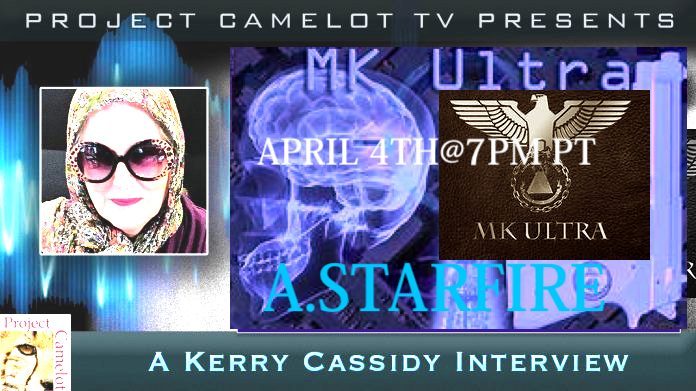 NOW COMPLETE:  STARFIRE IS MY GUEST RE MIND CONTROL AND NAZI AEROSPACE PROJECTS – EDITED FOR DELAYS

Short bio:   Dark Lab survivor, Starfire was born into the Illuminati and donated for experiments. She describes autism vaccines, brain implant technology and mind control products. The Americans discovered the Nazi Space Program after WWII and the camp liberations. They and took the plans from Germany which included brain based flight control. The American military-medical-industrial complex recruited aerospace Nazi doctors to America using Operation Paperclip. Starfire recounts her life as an autistic child in the space program. She describes the effects of test vaccines paired to electromagnetic frequency generators. By using wavelength technology, she recounts attempts by the space program to modify behavior. Are humans being genetically modified to be more compatible with artificial intelligence for life in space? Read MK Ultra Dark Labs to find out.–Anna Starfire  ALSO SEE MONARCH 47

A. Starfire tells story of Nazis aerospace projects during Operation Paperclip. She explains the use of the Die Glock to control plasma in experiments run by Kurt Debus and Dr. Emil Salmon both former SS officers brought to America. A. Starfire’s books are available on Amazon under Starfire Disclosure, MKUltra Dark Labs and The Hybrid Project. Please visit approved-therapies.myshopify.com to purchase Jesus is My Hacker tee shirts, mugs and laptop covers. All purchases and all views are appreciated deeply!!!!

SEE her video for background: