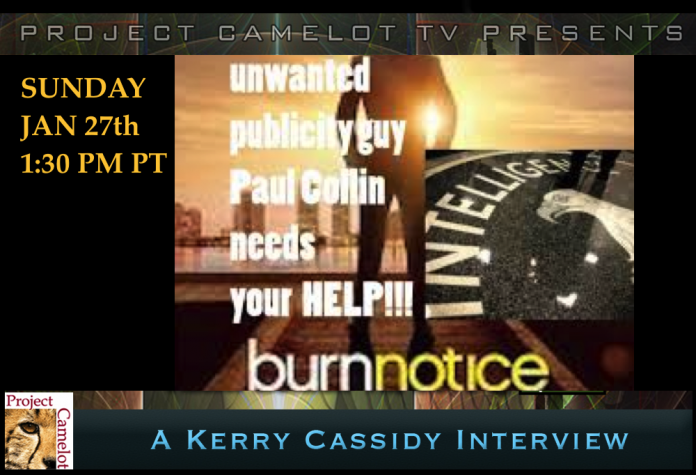 Since 2012 Paul Collin AKA Unwanted Publicity Guy, has been writing a column or guest blog for Project Camelot and assisting at times with investigations or research for my channel.  See:  GUEST BLOG:  UNWANTED PUBLICITY GUY

Here is a short bio written by Paul:

…”I was never “employed” by the ‘U.S.’ C.I.A. or ‘Korea’ C.I.A., both of which are U.S. secret organizations funded by U.S. taxpayer dollars. I was a “C.I.A. attache” ’employed’ ( full-time ) by the U.S. Department of Defense ( DoD ) in 1971 and 1972 assigned to Lowry AFB, Colorado; George AFB, California; and, Edwards AFB, California where I was ‘secretly imprisoned’ before my “General Discharge” later ( U.S. ) Congressionally upgraded to a fully “Honorable Discharge” with ‘all benefits’. In 1976, I began civilian freelance international work for one of many C.I.A. offices; specifically, located in El Segundo, California using a Hawthorne, California private telephone exchange number to evade U.S. Congressional Oversight. In November 2002, I began civilian freelance work for the C.I.A. led DOJ Squad Six foreign extraction unit ( it actually captured Manuel Noriega in Panama ) based out-of a ‘basement’ inside the Federal Building of downtown Portland, Oregon where I had met one (1) federal agent who gave me instructions as an international information “asset” prior to my leaving on one ( 1 ) specific foreign assignment in Eastern Europe lasting 4-years in Serbia on a Uganda, Africa assignment. While in Serbia, I met with the C.I.A. case officer at the American Embassy and the U.S. Legal Attache ( DOJ ) who wanted me to work in Bosnia while spying on Albania Muslims. When the U.S. Department of State Regional Security Officer ( RSO ) in Belgrade discovered the depth of my background with CIA-DOJ Squad Six, I was informed the C.I.A. did not want me in Bosnia. Instead, the government paid me to continue living in Serbia for 1 more week and paid my airfare back to Los Angeles, California on August 15, 2006. From November 2002 until October 2007, I worked continually as a CIA-DOJ Squad Six “asset,” who was ‘always paid in cash’ and only through a “cut-out” who signed for the envelope of money directed to me by the cut-out ( in Portland, Oregon ). In December 2010, I began working as an international information ‘asset’ for the U.S. Department of Homeland Security ( DHS ), Immigration and Customs Enforcement ( ICE ) Office of Special Investigations ( OSI ) whose “client” was the U.S. Federal Reserve Board” until I finally left in February 2011.
By 2012, I was providing voluntary research and reporting services exclusively for Project Camelot. I was ‘never’ employed as an ’employee of the C.I.A.’ and although I was about to sign a “business agreement” with Squad Six, which was ‘stricttly directed by one ( 1 ) C.I.A. Deputy Chief’, I was ‘never a federal contractor of the C.I.A. While my 1972 government discharge paper states clearly my government occupation as an Intelligence Operations Specialist with a “civilian related occupation” as an “investigator,” I am ‘not’ an “investigator;” although, my tradecraft capabilities do go well beyond that title.  [At this time,] I am only a “researcher” and “analyst” with a civilian employee occupational title of “expeditor.” While self-employed I was known only as a “consultant.” I am, by trade, a ‘freelance research consultant’ who by both chance and circumstance, since 1986, was rendered by the U.S. government as a “Non-U.S. Person;” even though I was born and raised through my collegiate years in America. In 2006, I snuck back into America where I have lived for the past 12-years as a ‘vehicular homeless person’ on the streets of Los Angeles, California. I seek no fame or fortune. I’m only trying to survive, whereupon and only according to the cards life has dealt me to-date. I do not legally qualify for any public assistance in America. I utilize my mind to research, analyze and write reports, and do so voluntarily because I have a heart for people who need to know. And ‘this’, you see, is why I’m left begging for donations, a shadow of my former self who was left crippled and aged.
PLEASE DONATE TO SUPPORT HIS WORK HERE:
www.paypal.me/UpiGuy/

I’ve been around, seen a lot, was trained by the best intelligence community and gave my heart and soul while working for people around the world because I care enough to enlighten others.
Sincerely,   Paul” — PAUL COLLIN, UNWANTED PUBLICITY GUY  CONTACT: unwantedpublicity@gmail.com