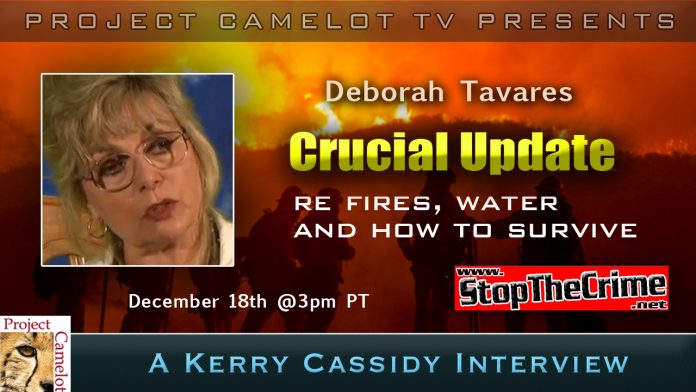 She is an excellent researcher and activist who finds the documentation to support everything she claims.

Bio from her site:  stopthecrime.net

see her bio below…

Deborah Tavaresis a 3rd generation land developer of residential construction and has been self‐employed in a family operated business for over 30 years.  She specialized in land feasibility studies, acquisitions and building permit processes, including required Environmental Impact Reports (EIR), along with furnishing Department of Real Estate (DRE) subdivision requirements and the entire construction build‐out to completion.  It was during this process that the restrictions of property rights became evident under the creeping constraints of the United Nation’s AGENDA 21, through land use limitations, restrictions, regulations, fees and increased liability exposures. Deborah is spreading the word, exposing the connections between mysterious global trends of man‐made and corporate/military controlled technologies, weaponized frequencies, the falsified science of the “global warming” movement, and other major programs intended to cause damage to health and reduce the population and to eliminate freedom for all people for all time.  A primary example of this is the multi‐national program to install electromagnetic‐ radiation‐emitting electric meters (Smart Meters) and programs that will create scarcity of electricity, gas and water. Deborah’s highly visible opposition to Smart Meters has been heard on national and international radio shows, digital media, magazine and newspaper coverage, a discussion with Ted Turner—Depopulation 95%/Cannibalism (on YouTube—Ted The Terrible Turner), Russia TV (RT) television coverage at Bohemian Grove/2011, smart meter protests, community awareness campaigns and countless city, county and public utility meetings.   For more information on her research, she has a variety of websites, including: www.RefuseSmartMeters.com