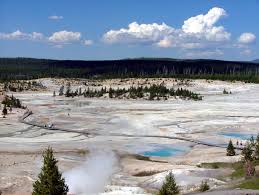 My earlier quick text replies surrounding my looking into America’s
‘multi-state volcano territories’ of “Yellowstone National Park,”
including its neighboring area “Grand Teton National Park,” brought to
mind my former research on this.

Unfortunately, since ‘that’ particular “antimatter hydrogen”
‘propulsion fuel system’ was all locked-up and tied with the bow of
“Sensitive-Secret” to “Cosmic” since well before CERN or even its
resident frankenstein machine ( LHC ) was ever designed’ – decades
earlier.

The only other “spacecraft” was what the U.S. government rarely
spoke-of, which those in that ‘specialty’ called, “Non-Referenceables”
or “Un-Referenceables” interalia ‘what many people reference’ as
“Unidentified Flying Objects” ( UFO ), now ‘that’ I had obtained an
‘official video’ of in-addition-to a private amateur color video of;
clearly showing the spacecraft jettisoning the very hot magma back
into the sea.

Hopefully, the aforementioned awakened a few people reviewing this ‘Update’.

I rediscovered, not only my earlier research publications, which I
properly provided research links to my 2016 Project Camelot report,
but I also rediscovered my official and private video link showing
UFOs jettisoning hot magma into the sea.

Based on my extensive research, I postulated harvesting magma from
where I learned it must ‘specifically originate-from within ‘lava
tubes’ and ‘volcanoes’.

I believe rediscovering my 2 reports ( 2014 & 2016 ) will actually
serve to provide people with even-more details as-to what to watch-for
in-lieu of current news affairs so, audiences may now gain an
even-better heads-up, which for ‘even me’ is very important to
re-analyze and re-assess.

Be sure to review my Reference links ( below ), plus those links
provided therein each report:

(1/4) One new point of interest for your audience is not just ‘how’ the ‘Yellowstone volcano vents’ has ‘demonstrably increased recent activity’ whereby officially-proving ‘vent eruptions’ now notably ‘more frequent’ plus ‘more violent’, all the public sees ( if anything ) are ‘all officials softening word definitions away-from “Volcano Vents” down to ‘only playfully spraying steam’ “Gysers” used quite effectively to ‘down-play’ and ‘dismiss-away’ the ‘serious gravity’ of factually proven ‘increased volcano vent activity’. I have a second point …

(1/3) Second point of interest, officials speak only that ‘worst case scenario’ that can happen is only “ash fallout,” which people think-of as no big deal simply combatted with cheap ‘paint-spray masks’ or ‘medical masks’, which is ‘not the case at all’. Facts prove that Yellowstone volcano ash fallout ( alone )

‘turns all breathing lungs into sacks of cement mix’, and ‘that’ ( alone ) is “not the extent of a Supervolcano eruption’ such as Yellowstone’s.

I would highly encourage your audience to watch this film so-as to comprehend not just the ‘ash fallout’ of the ‘Yellowstone volcano’ but also fully comprehend just ‘how Yellowstone is linked westward to other volcanoes in America. This film is factually based upon what official data has collected. Hence, I recommend ‘everyone watch this movie’.

Read the intro text, just before the full movie.

If people care to support my continued 6-years of volunteer work at
Project Camelot, anyone can simply donate directly to me by clicking
my link ( below ):

Aiding me for only my very basic living, as a ‘vehicular homeless
person’, now going on for the past 12-years. Aged cripple war veterans
of a foreign war ( Viet Nam ) do not fair well living on the streets.

About The UPI Guy –

Thanks for your continued reading and observations at Project Camelot !