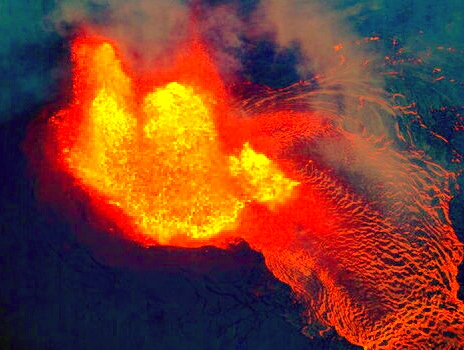 LOS ANGELES – June 3, 2018 – The following exclusive report includes research notes I collected from far more research and documentation provided by Duke University doctor of philosophy graduate Catherine Lewis Kenedi ( Kenedi, C.L. ) whose dissertation served to penetrate some of the secrets surrounding ORMAT TECHNOLOGIES INC. ( OTI ) subsidiary PUNA GEOTHERMAL VENTURE ( PGV ) facilities and contractor operationals whom wildly chose to drill down into the Earth as far as they could go just to make a greater profit while keeping everything hidden away from people of the public.

Very little is being said by government officials surrounding what has only been identified as “Fissure 8,” which holds far more secrets to what actually is occuring on Hawaii’s southeast flank of Mt. Kilauea volcano located several miles away from this ‘new volcano’ that has yet to be ‘officially named’ by the U.S. Geological Survey ( USGS ) “Chief Scientist” who may never address the public as to what actually caused the big island of Hawaii to sprout a ‘new volcano’, which I reported last week as having occurred because of bore hole well drilling and fracking by ORMAT PGV having diverted the primary magma tunnel lava flow feed away-from the Kilauea volcano magma chamber beneath the summit crater that has been drained to the southeast.

Government Complicity In These Dangerous Undertakings –

The U.S. Environmental Protection Agency ( EPA ), U.S. Department of Energy ( DOE ), federally contractors, consultants as well as Hawaii officials all served to facilitate clearances and permits enabling those responsible for abbsolutely unconscionable drilling and fracking operations to begin and continue for many years where the PUNA GEOTHERMAL VENTURE ( PGV ) was operational.

Surrounding a most curiously labelled “drilling accident,” I found evidence that ORMAT PGV drillers ‘breached a magma tunnel network’ and continued punching through that super-hot “dacitic magma” tunnel feed over and over again whereupon that extremely hot magma was gushing out of the hole until the drill-bit was pulling out “glass fragments” from Earth’s lithosphere beneath.

Although further and much more detailed information is available within the Duke University 2010 research report submission, only a few excerpts of which are provided within my report research notes ( immediately below ), one can easily determine by review and research just exactly what type of wildcat drilling and fracking operation has been going on behind the people’s back.

Department Of Earth And Ocean Sciences

“… The permeability of massive igneous rock is <10-16 m2, too low to support convective fluid circulation, so ‘fractures are required to maintain high-temperature systems’ that are  almost always associated with volcanic regions ( Rowland and Sibson, 2004 ).

Faulting appears to be critical for maintaining permeability in hydrothermal systems by providing a dynamic element:

Fractures in hydrothermal systems are easily filled by mineral precipitation, and active faulting interferes with precipitate accumulation or ‘reopens fractures that have been sealed’ ( Curewitz and Karson, 1997 ).

The model explains ‘the occurrence of earthquakes in swarms’ as ‘due to sequential slip of multiple microfractures’ in a network ( Hill, 1977 ).

In the Sibson model, ‘slip – along the microfractures – creates openings at the fault intersections that are perpendicular to the dominant faulting direction’,  i.e.  ‘extension  fractures’ ( Figure 16 ) ( Sibson,  1996 ).

For the geothermal industry, the test of the permeability of a hydrothermal system is ‘whether high temperature fluids can be drawn from the system – in great enough volume – to generate sufficient electricity’ to ‘retrieve the extensive capital investment’.

At the PUNA GEOTHERMAL VENTURE ( PGV ), in southeast Hawaii, production has  been active since 1993 and provides 25 – 30 megawatts of electricity to the island of Hawaii.

The plant [ “ORMAT TECHNOLOGIES INC.”‘s “PUNA GEOTHERMAL VENTURE” / “PGV” ] is built on only 2 kilometers2 [ 2 square kilometers ] but has ‘thirteen [ 13 ] wells’, including both ‘production [ wells ]’ and ‘injection [ fracking ] wells’. ‘All of the fluid, extracted from the ground, is reinjected’; a ‘process [ fracking ] that likely contributes to the constant shallow microseismicity’ [ earthquakes ] – discussed below and in Chapter 2 ( e.g. Eberhart-Phillips  and  Oppenheimer, 1984 ).

In addition, as discussed below, the ‘presence  of molten dacite [ magma ]’ was related to the high velocity P-wave tomographic results to ‘indicate an intrusion and associated magma body’.”

“… It is indicated that ‘wells that penetrate the  area where we calculate the greatest fracture density have higher fluid flow’ than wells elsewhere in the PGV [ PUNA GEOTHERMAL VENTURE ] lease.

3.1.1  Geologic  setting The  island  of  Hawaii  is  the  last  in the  series  of  volcanic islands and seamounts in the Hawaiian-Emperor chain.

The  volcanism  is associated with a mantle plume, or “hot spot” that has resulted in the outpouring of voluminous ocean island basalt.

An actively producing geothermal power plant, PUNA GEOTHERMAL VENTURE ( PGV ),  is located on [ lava ] flows from 1955; the intrusion associated with the 1955 flows is thought to be the heat source for the hydrothermal system [ Puna Hydrothermal System / PHS ).

The presence of the intrusion has been suggested by a high velocity zone in P-wave tomography ( Shalev, et al., 2008 ).

“… A relay ramp connects the hanging wall of one normal fault to the footwall of a parallel normal fault that overlaps in map view and has the same dip ( Peacock, et. al., 2000 ) ( Figure 23A ).

Figure 23B is a photograph of a relay ramp at the Hilina [ HILINA SLUMP ] Fault System ( HFS ), south of Kilauea caldera ( Figure 17B ).

Figure 23A illustrates ‘the area of increased stresses in-between the faults; the stresses are higher in the middle of the circle’ but fade moving away from the center.

The [ dacitic ] magma was discovered during ‘routine drilling at PGV [ PUNA GEOTHERMAL VENTURE ]’. The ‘drill team inadvertently drilled into active  magma’, which ‘repeatedly oozed-up the well bore [ hole ]’ while the drill bit was withdrawn and relowered; drilling was stopped when ‘clear glass chips came out’ as cuttings.

The ‘[ dacitic ] magma demonstrates’ both ‘the unpredictable nature of this system’ and, perhaps, ‘an explanation for the local high heat levels’.

Much work remains in terms of ‘discovering the source of the [ dacitic ] magma’, and we intend our contribution to be towards ‘understanding the structure that encouraged the magma to accumulate and differentiate under the Puna Geothermal [ PUNA GEOTHERMAL VENTURE / PGV ] field’…”

Until now, seismic data at the [ Lower East Rift Zone ] LERZ have been limited but have suggested a major south-dipping fault; Owen and Burgmann (2006 ) show ‘earthquakes deepening from the LERZ towards the ocean’.

The seismic data we have gathered also support the presence of an earthquake – producing south-dipping fault that dips downward from the LERZ [ Lower East Rift Zone ] ( Figure 19 ).

As discussed in Chapter 2, ‘the majority of earthquakes’ – at the PHS – are shallow and ‘most likely associated with production and fluid reinjection [ fracking ] at the geothermal  plant [ PUNA GEOTHERMAL VENTURE / PGV ]’.

‘Deeper earthquakes occur under the shallow swarms, and the depths increase to the southeast’, orthogonal to the rift orientation…”

Be sure to review my “Research References” provided ( further below ).

If you enjoy my UPI Guy reports and research references that seriously document my investigative research, reporting and analysis please let a friend, loved one or associate know by passing along The UPI Guy column webpage link beneath my name plus a little bit about my background, history plus my other online volunteer work enlightening many people’s other interests over more than 20-years.

My voluntary research and report writing for Project Camelot audiences over the past 6-years, while I have been ‘vehicular homeless’, can only continue with your good will donation directed to me. Simply click my “UPI Guy” PayPal donation link ( immediately below ):

Submitted for further review and commentary by,

MY REPORT ‘RESEARCH REFERENCES’ ( BELOW ) –