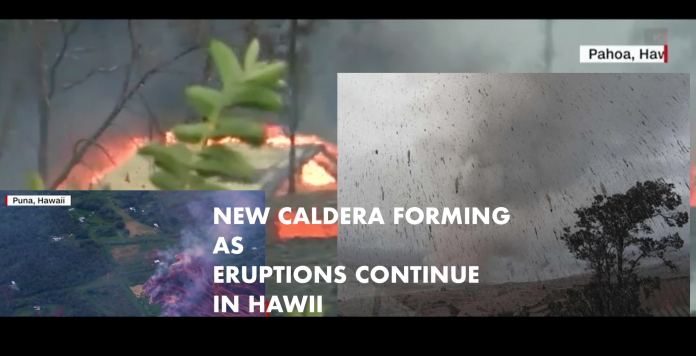 READ BELOW FOR UPDATE TWO

A brand new caldera is forming in East Rift Zone of Hawaii, which
means ‘another volcano’ is being born where lava is now shooting up
500-feet into the air; a new type of very liquid lava that oozes out
and flows very quickly. Residents are now being encouraged to
evacuate. This is now a quadruple threat.

The ‘Hilani Slump’, threatening to break-off up-to 10% of Hawaii’s
southeast side, is in the East Rift Zone. Hawaii is also seeing new
rifts forming, north of there. What’s now going on is the first of
several new major geological events taking place.

Personally? I would immediately head to Arizona were it not for the
fact I am not seeing enough donations so, I can leave southern
California as I am still vehicular homeless for 11-years while
researching and reporting as a volunteer for the past 6-years for
Project Camelot.

If you do not have a PayPal account please refer to your financial
institution’s ‘bank to bank’ transfer information, which can be done
on your internet.

For my bank transfer information, please review details within my
earlier report, here:

Thank you for anything you can possibly donate.

Recently, the government embedded USGS reporter on television verbally
minimized what is actually going on in Hawaii, however by not only his
own ‘admission’ and ‘chart’ spelled out, that:

What ‘was fueling the Kilauea volcano’ is ‘now being forced through
lava tunnels he calls “pipes” feeding a fresh new highly liquid of
much hotter more molten faster moving lave that is pouring down onto
and on top of a geologically unstable land mass debris field known as
the ‘Hilani Slump’ whereupon a ‘brand new volcano’ is about to be
birthed above ground within the boundaries of the ‘Lower East Rift
Zone’ thay spells out a big natural disaster is cirrently under
development and about to become a catastrophy for people coast to
coast.

The best current aerial footage, just last night displays far more
about what is actually going on in Hawaii, recently:

What’s Occurred And What Broadcasts Are Not Clearly Reporting Publicly –

Kilauea volcano has “emptied’ its caldera magma chamber, which also
collapsed, that stopped the lava from exiting the summit of that
volcano.

Earth’s mantle lava is no longer flowing up into Kilauea volcano, but
is now flowing away towatd Hawaii’s ‘southeast coastline’ toward
another gellogical problem known as the ‘Hilani Slump’ where the new
lava natural tunnels or “pipes” ( per, USGS spokesperson ) are
funneling the lava meant for the old Kilauea volvano into a ‘brand new
volcano just forming’ now.

I have studied such incident formations before where a ‘new volcano
caused such a huge rift in land mass within only 4-days, that the
entire ground swelled up to form a huge new land mass the size of a
small island within a salt water lake near the island of Vanuatu.

VANUATU ISLAND, Port Vila – December 26, 2010 – It may be difficult
for some to realize this report is ‘not science fiction’, but within
the Pacific Ocean volcanic arc “Ring of Fire,” in just a few days of
November 26, 2005 Vanuatu Island residents did not even realize their
island Lake Voui was where its ’new inner island mountain’ Mt. Manaro
(aka) Aoba volcano was ‘created in merely a matter of a few days’
after their 420-year old volcano’s ‘highly volatile magma was mixed
into their lakebed hydrochloride sulfuric acid geochemicals’; only
just learned last year ( 2009 ) as the actual trigger mechanism
setting off the incredible ‘Phraetic’ explosive eruption.

[ The term: “Phreatic” explosion is what to fear most, and so my
report continued: … ]]

In Hawaii, the Pacific Ocean, where the mantle’s new lava tunnel is
headed beneath the ground and above ground atop the Hilani Slump is
the exact same mix of that ignited the Phreatic ecplosion in the lake
near Vanuatu.

The little known about likely pending “Phreatic” explosion on Hawaii’s
southeast Lower East Rift Zone side, amidst the huge underground and
underwater Pacific Ocean coastline debris field known as the ‘Hilani
Slump’ will easily break-off at-least 10% of Hawaii’s southeastern
extremely unstable land mass debris field into the Pacific. And,
‘that’ is precisely from where the big ‘tsunami’ will originate that
hige geological earthquake displacement soon.

Based on my careful global research of geoastrophysical historical and
current facts, plus what I saw the United States Geological Service (
USGS ) ‘verbally minimize’ very carefully so, as to not frighten
people forcing a giant exodus from the islands of Hawaii, there is no
doubt in my mind about what is currently transpiring and will occur
very soon.

Open your eyes, people! This is ‘not science-fiction’, but hard
science facts, which to-date not yet being broadcast far and wide on
television.

Think Hawaiians are going to be able to catch an air flight out-of
Hawaii ‘after this blows and a tsunami washes up’?

I have been publicly researching and writing intelligence reports
since 1968, and began doing it full-time for U.S. government
intelligence in 1971 and part-time until 2011, and then volunteering
my research and reports exclusively for Project Camelot audiences
since 2012.

Please help support me by your donation, here ( click link below ):