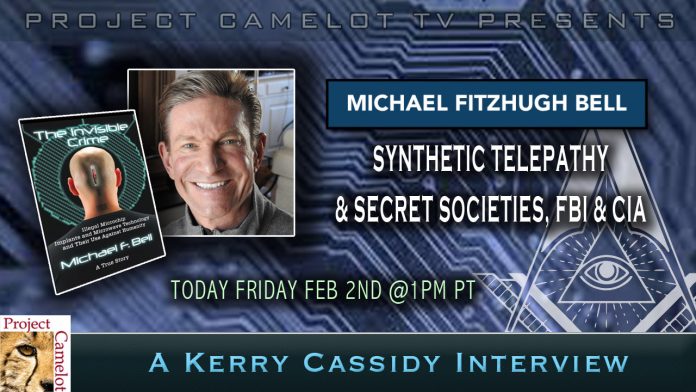 “…In my new book, The Invisible Crime – Part II – A Targeted Individual, Synthetic Telepathy And Global Criminal Biomedical Human Experimentation, I expose and reveal aspects of the crime of covert human experimentation never before discussed.

Here are a few of the subjects I cover in great detail in the new book:

1. Synthetic Telepathy – The bidirectional information process between a human being’s mind and a supercomputer. The capability of reading and interpreting a person’s brainwaves and also putting back information in real-time.

2. Trans-humanism – The idea of human beings evolving beyond normal physical and psychological limitations through science and technology.

3. The Cabal – A secret government or political clique, group or faction. Secret Societies that are believed to exist within the current DOJ and FBI and large Multi-national Corporations. It is the Cabal which I’m lead to believe that are behind my specific victimization.

4. Covert, illegal human experimentation being performed on innocent American Citizens and people around the globe without their knowledge, permission or consent. This includes advanced medical testing and psychological experimentation.

5. Advanced Camouflage or Invisibility Cloaking Technologies currently being employed and reported by hundreds of Targeted Individuals around the world.

7. Remotely Induced Mind Control achieved through Electronic Harassment/Bioelectronic Torture is believed to be at the heart of the Psychological Warfare Program, now reportedly being scaled to the entire human population.

“Secret Societies” that may exist within the DOJ and FBI.

My websites have been updated to include all of my current research.”

Thank you thank you thank you Kerry. And Michael. Thank you for talking about this. We need much much more of this so people will understand just how prevalent it is. Great job explaining it Michael! Fantastic. The big problem is that it’s secret, and people are unable to talk about what’s happening to them. No one believes them. It’s been going on for a long time. Horrifying things are being done to people because those who do it are assured impunity. So they’ll do ANYTHING they can think of. It’s the same can of worms as the pedophilia. Some… Read more »

I believe you, Michael. My son joined the USMC and got out with an implant in his neck. We are at the mercy of these evil people.