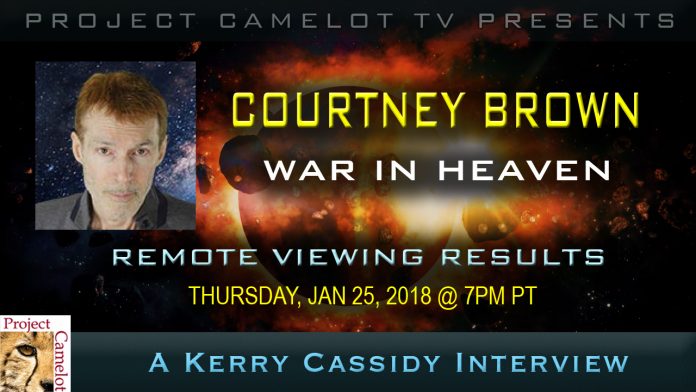 Kerry interviews Courtney Brown from farsight.org about his team’s remote viewing of the Bible phrase “war in heaven”:

GO to The Farsight Institute www.farsight.org to view the sessions related to this topic.

About RV: (from Farsight.org …”Remote viewing is a controlled and trainable mental process involving psi (or psychic ability). It is used to transfer perceptual information across time and space. It is clear that remote viewing works in complete violation of the accepted “laws” of quantum and relativistic physics. So those “laws” are incomplete. There is a theory about why it works on the level of physics, but that theory has not yet gained mainstream acceptance. The core of that theory involves an interpretation of quantum mechanics that is known as the “Other Worlds” interpretation of the famous “two-slit experiment” that was developed by Hugh Everett and published in 1957. A majority of mainstream physicists currently do not support that theory, but the number of physicists who do support it is significant and growing.

Remote-viewing procedures were originally developed in laboratories funded by the United States military and intelligence services and used for espionage purposes. The scientific understanding of the remote-viewing phenomenon has greatly advanced in recent years, and as a result the process of remote viewing can now be reliably demonstrated in both laboratory and operational settings. There are a number of styles of remote-viewing procedures that are popularly practiced, such as Scientific Remote Viewing (SRV), Controlled Remote Viewing (CRV), as well as a few others. Remote viewers use one or more of these styles to gather descriptive data of a “target,” which is usually some place or event at some point in time. Remote viewing is always done under blind conditions, which means that the remote viewer must know nothing about the target when conducting the remote-viewing session. All of the various styles of remote viewing require both training and regular practice in order for a remote viewer to become proficient. Remote viewing is normally considered a controlled shifting of awareness that is performed in the normal waking state of consciousness, and it does not typically involve an out-of-body experience, hypnosis, an altered state of consciousness, or channeling.”