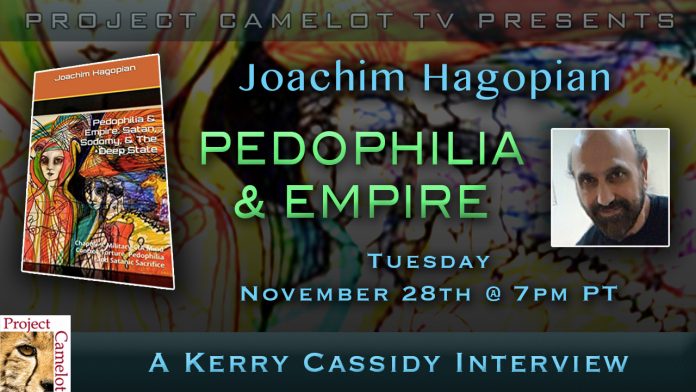 I will be talking with Joachim Hagopian regarding his new book, “Pedophilia & Empire: Satan, Sodomy, & The Deep State [Click to Return to TOC]” today November 28, 2017 @ 7pm PT.

Joachim Hagopian is a West Point graduate and former US Army officer. He has written a manuscript based on his unique military experience entitled “Don’t Let The Bastards Getcha Down.” It examines and focuses on US international relations, leadership and national security issues. After the military, Joachim earned a master’s degree in Clinical Psychology and worked as a licensed therapist in the mental health field with abused youth and adolescents for more than a quarter century. In recent years Joachim has written hundreds of articles featured on various alternative news sites, primarily Global Research, Sott.net and LewRockwell.com. He also maintains a blog site at empireexposed.blogspot.co.id/.

Revised Table of Contents with Links to Individual Posts

Section One: Introduction to Pedophilia

Chapter 3: Tracing the Ruling Elite’s Pedophile Bloodlust for Children from Antiquity to Today

Chapter 5: Sins of the Sovereign Military Order of Malta

Chapter 6: The Jesuits as the Vatican’s Order of Assassins

Chapter 7: The Vatican and the Popes’ Sins – Pedophilia Abuse and Church Cover-up

Chapter 13: The Franklin Scandal – Pedophilia Inside the White House

Section Five: Europe’s Scandals and Beyond

Chapter 19: Pedophilia around the World

Chapter 24: Children – Kidnapped and Grown from Stem Cells – for Medical Experimentation and “20 Year and Out” Secret Space Colonization Missions

Illuminati Dumbing Down and Depopulation Agenda, Global Populist Movement Resistance and Truth and Reconciliation Commission to Expose the Satanic Cabal