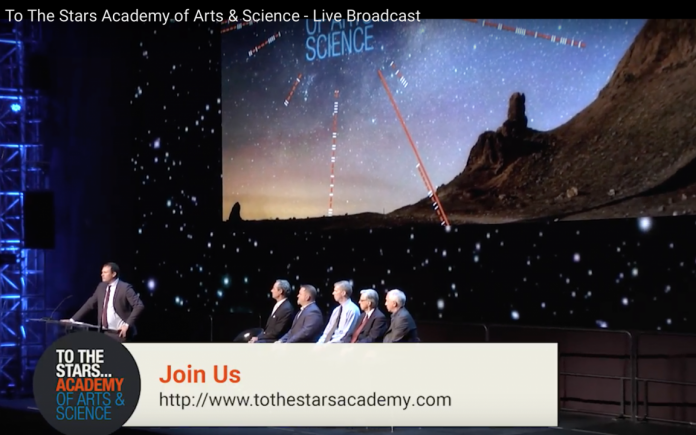 This new effort by Tom DeLonge and a high profile team of scientists, intelligence agents and aerospace engineers to disclose the truth about UFOs and ETs focuses on the technology.  This is a predicable effort which is better late than never.  And if it wasn’t for the disclosures of Captain Mark Richards revealing that Reptilians are forcing disclosure you probably would think this was coming out of the well intentioned hearts of the team on stage in this video. See below for actual quoted text**.

But the truth, as usual, is more complex.  Be aware that when certain ET / extra dimensional entities are pushing disclosure because they believe it will create chaos, the humans have no choice but to try to get people up to speed with the truth before that happens.  This is the effort you are witnessing.  To the Stars Academy is for beginners, newbies and those in denial about whether we are “alone”.  While for young people with good intuition and awareness this effort is rudimentary.  For those in denial and those who are completely lodged in the 3D reality.. where seeing is believing, this will be a beginning.

My advice guys, not that you asked, is to reformulate your message to be more clear about who you really are and what you want.  Fishing for more ufo reports from the masses is not gonna get it done by the way… In case you haven’t noticed UFOs and Abductions have been and are being reported daily on Youtube.  Don’t act like this is the 1960s… come on everyone knows we are not alone.  It’s the secrecy you are trying to break through and pretend it’s all gonna be different.  You are a good potential team but you need to lead with more than some half-assed ufo encounter.  Did I hear one of you say “Maybe were not alone”?  Really?  You are going to have to do better than that or you will all disappear into the dust of history in the making.

SO CALL IT A SECRET MACHINE OR AERIAL THREATS, UFOS ARE REAL.  SOFT DISCLOSURE IS HERE NOW…

He thinks they have been dealt with for the time being due to battles with them.  At least at this location.”–Kerry Cassidy