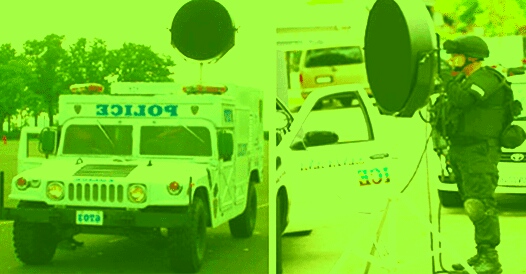 Hailed, by some ( unknowledgeables ), as a ‘non-lethal’ security measure, it only ‘appears’ as ‘the least violent defense’ mitigating metropolitan problematic crowds exercising civil unrest.

France has been using them mounted atop tanks and police cars since the mid-1970s.

In 1975, interests moved to magneto microwaves focused down a conical-shaped accoustic waveguide that blew high-energy microwaves out-of what looked like a hand-held hair-dryer; hooked to a cumbersome power supply stuffed into an outdoor back-pack.

They’ve been used as warehouse secret ‘anti-intrusion’ devices and systems for years. Few know about them.

So, now you know a little more.

Just so you know, the following offers a little more:

Positive or negative, I believe ‘your’ “Comments” ( brief or long ), let me know about what topics interest you most today.

Don’t be a stranger! Send your e-mail comment to me ‘direct’, ay: UnwantedPublicity@GMAIL.Com

If you really enjoy the UPI Guy reports, your support is welcome.

Simply click on any of ‘my’ ( blue colored outer-space picture ) PayPal images, and I ( now an elderly handicapped crippled military veteran ex-spy ) will welcome your donation.

Want to know a little ‘About’ me? Click, here: