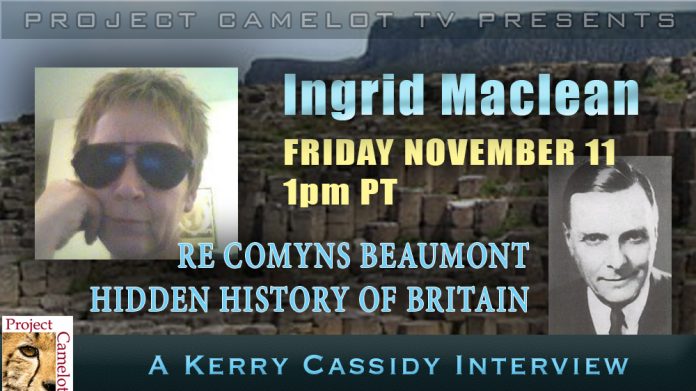 I interview Ingrid Maclean, editor of the COMYNS BEAUMONT book THE GREAT DECEPTION about the hidden history of Britain.

See below for more info about Ingrid Maclean.

Republishing his books with the support of the Du Maurier family. Currently working on two documentaries with MARK WINDOWS – one about Gypsy Dave and Donovan in the 60’s, and one on Britain’s Stolen History. As Mason Bigelow, authored THE HITCHHIKER’S GUIDE TO THE ISLES OF WONDER, and THE PRINCE OF THE PURPLE THREAD. Three new books to be published at the end of November. ROCK GODS (CB summary concentrating on Ancient weaponry), THE MONKEY PUZZLE – stories about spirit and reincarnation, and THE RED TELEPHONE… (not telling!)

I’m a linguist and former tutor now home educating my twin daughters and
researching and writing about the origins and structure of language and its
association with all thatcatastrophic history we don’t get to see.

As Mason Bigelow I’ve written a book about the lost history of Britain (I’m now
working on another) and a play based on Comyns Beaumont’s life of Francis Bacon
as the secret son of Elizabeth I and the author of the plays of Shakespeare.

I’ve just finished a book of short stories based on my personal experiences of
Spiritualism, Rosicrucianism and freemasonry, following on a traumatic and tragic
accident which turned my world upside down and showed me a bigger picture.

I curate the Comyns Beaumont Archive with the Du Maurier family, and run a
small independent publishing house with my own family, reissuing important and
hard to find titles byComyns Beaumont, J W Dunne and David Lindsay, along
with many other books on related topics by well-known authors previously
out of print, as well as works by ground-breaking new writers.

We also have a Puppet Museum with a Punch & Judy Show, which might seem
a wee bit incongruous, but when you watch the film you’ll be surprised to see
how many seemingly weirdly-placed dots actually do join up, and how central
to the story is Mr Punch!