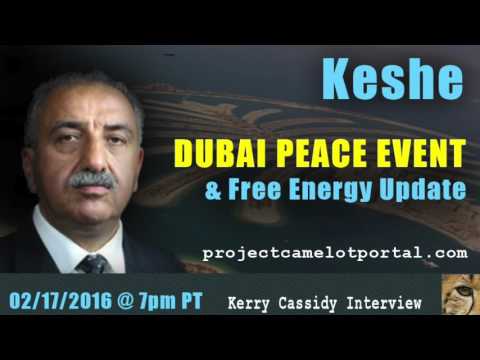 I interview MT Keshe from the SPACE SHIP INSTITUTE and KESHE FOUNDATION www.spaceshipinstitute.org/ about his upcoming April 21st 2-day Dubai Peace Event and we get his update on free energy and his views on the state of the Planet.

KESHE is a plasma and nuclear physicist originally from Iran who set up the Keshe Foundation and is exploring energy from the vaccum also known as free energy or zero point energy.

NOTE:   I am aware of some of the rumors going around about Keshe.  I ask him about this.

KESHE AND ACCESSING THE ZERO POINT OR TRUE ENLIGHTENMENT

KESHE AND ACCESSING THE ZERO POINT OR TRUE ENLIGHTENMENT

Last night it became totally clear to me what Keshe is doing and why there is such a disconnect between what he is doing and talking about and physicists and what they are describing.

When I asked Keshe if the he was building a ship to go into space he said yes that was his ultimate goal.  To go into space.  When I asked him if he was going to therefore build a UFO or saucer he said no… So I then asked him, after he tried to describe the type of ship he would build saying the energy he would use is “plasma”, if he was talking about building a “plasma beam ship”  and he said YES.  This clarified it all for me.  Because as a magician or someone who has studied magic for many years as well as the path of the yogi or enlightenment I then understood what Keshe is really trying to do.

He is trying to access what we call the zero point field or the energy of the vacuum or what Wilhelm Reich called ORGONE and what Indian mystics call KUNDALINI ENERGY.  And Plasma physics as I now understand it is nothing more than the study of that energy.  Plasma = Orgone = Kundalini = Light.

In essence we are talking about forms of light.  Turning light into forms that we can use to get from point A to point B.  So when we meditate we are accessing this energy.  We are manifesting this pool of energy or plasma and building something with it in essence a ‘time travel machine’ or ‘merkaba’ that we can then use to transcend this dimension and travel through space (transcending time).

So Keshe as a physicist is really working on trying to put this energy into a machine to make it something “anyone” can use.  Which is like saying building a machine to bottle this substance makes it possible for the unenlightened to do anything they want to do, go anywhere they want to go… without having to do the work on a spiritual level necessary to be able to do this without a ‘machine’.  In a sense then, all machines are no more than extensions of men who are trying to use something outside themselves to achieve what they should be able to do without any assistance from anything ‘outside’ themselves.  In essence becoming the true MAGICIANS we really are.

What a true magician is able to do is transmute one form of energy into another, at will.  That’s it.  Now what we call dark magicians do this in order to have power over others.  But a light magician who has become enlightened (filled with light = one with the light) is able to transmute one form or energy into another at will is simply ‘at play in the fields of the lord’ or more simply ‘at play’.  A magician on the way up the ladder of Magick will use props to get themselves into an altered state so they can meld with the power (which Keshe calls plasma and I call orgone or kundalini energy) in order to then be able to manifest at will.

Where all of this comes down to or around to is that physicists and magicians and seekers of enlightenment are all trying to do the exact same thing… access the “path” to enlightenment which is actually accessing zero point or the energy of the aether or kundalini energy or orgone in a continuous manner which is nothing more than full enlightenment or union with God.

What the Illuminati are doing is trying to bar humans from accessing this path or power (call it what you will).  It’s all the same.  Why?  Because the what we call Illuminati is nothing more than a dark magician exercising their learned ability to access the power of the unseen in order to bend it into power over others because the dark magician is obsessed with material power…. power over other beings and power for its own sake.

Ultimately, the efforts of Keshe to bottle this plasma energy into a useable form and teach others to do so is simply a  drive to bring the world/humanity into recognizing their own ability to access this power and transcend this world or leave this world that he thinks (and many others think) will ultimately self destruct.

To Keshe’s credit he does recognize on a deeper level that the study of plasma physics is in essence the study of the path to enlightenment.  And along that path, man has a tendency to want to build machines (or ‘tools’) to manifest quickly and easily (without effort) things that ultimately when he has become a fully realized fully enlightened (one with what we call God) being or God-like being in essence a realized God, he or she can do on their own without any machines or physical prop.  We will all ultimately be able to turn water into wine, walk on water and travel in time.  And we don’t have to “go anywhere” in order to do so.  It’s all in us.  We are all on that path.

So why is there such a drive to silence free energy scientists by the Illuminati?  Because again, the Illuminati are dark magicians who want to keep humanity in an unenlightened state in order to be able to control them and use their (humanity’s untapped orgone energy) to dominate this Earth and the universes or multi-verse.  And why they will ultimately (as they well know) fail is because the human being is actually a vessel or generator of orgone which is like saying we all are vessels of light or light beings and will at some time, get the message of who we truly are, access and recognize our own true power.  Become true magicians in our own right or enlightened ones and no longer be controlled by any other beings who are bent in having power over us.

As we were told many years ago when we first started on the journey of Camelot.  The biggest secret is accessing our true power, the truth about who we really are.