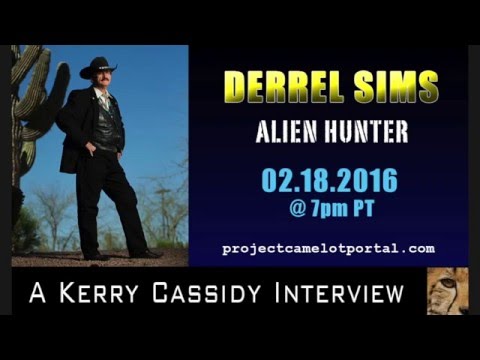 I interview Derrel Sims about his latest investigations into aliens and abductions.  We talk about MILABS, John Mack, and evidence for abductions as well as ETs possibly indigenous to this planet….

Veteran researcher of anomalous scientific studies, Derrel Sims a.k.a. “THE ALIEN HUNTER,” will discuss his quest to unveil the hidden agendas behind alien abductions and alien implants. This includes new work on the DNA of abductees who claim their parents were unwitting surrogates for their alien abductors. Sims will probe deeper into the possible purposes of the alien’s genetic program—what do they want to create, and to what end? Sims will discuss several of his provocative cases where he hopes recent breakthroughs in DNA testing may reveal startling finds. Best known for his pioneering work on alleged alien implants and embedded objects, fluorescent “alien fingerprints,” and alien manipulation of the human subconscious, the master hypnotherapist and licensed private investigator continues to push the boundaries to see where the evidence leads.

Derrel Sims, the Alien Hunter, is the world’s leading expert on alien abductions. His 38+ years of field research has focused on physical evidence, and led to his groundbreaking discoveries of alien implants and alien fluorescence. As a former military police officer and CIA operative, Sims has a unique insight to the alien organization which he believes functions similarly to an intelligence agency. Sims is also a compassionate and skilled therapist who has helped hundreds of alien experiencers all over the world come to terms with what they’ve witnessed.

Frequent guest on countless radio programs worldwide, including Coast to Coast AM, Jeff Rense, Jerry Pippin Show and many, many more.

Sought-after speaker at conferences and workshops throughout North and South America, Asia, Europe and the Middle East.