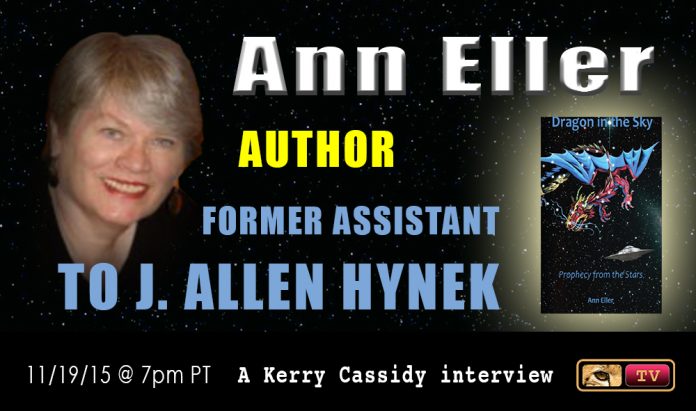 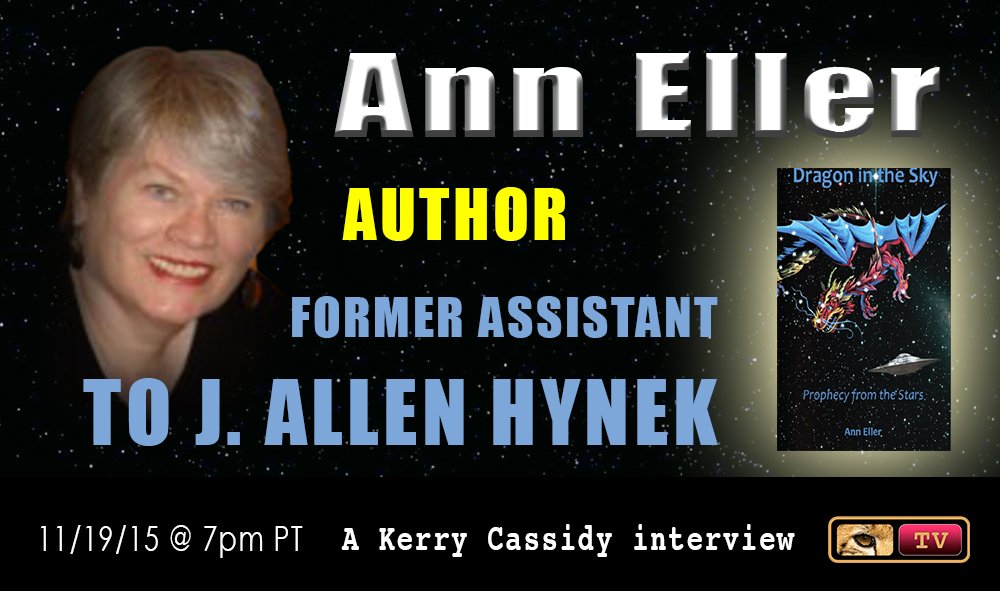 BIO from her site:
Ann Eller, author of Dragon in the Sky: Prophecy From The Stars
Ann Eller has had a diverse and expansive history as an elementary school teacher, ob-gyn nurse practitioner, gyn surgical nurse, medevac nurse for the Peace Corps, White House volunteer, world traveler, and secretary to the renowned astrophysicist, Dr. J. Allen Hynek.

Ann has had her own extraordinary experiences with alien visitors. In her book, Dragon in the Sky: Prophecy From the Stars, she tells of her astonishing experiences, her message from the stars, and her appeal to all for higher consciousness and UFO disclosure.

Her personal philosophy is that we are here to realize our passions and dreams and in so doing we are naturally following the Path back to the Source of all creation.

She is the Mother of two and Grandmother of three and currently resides in Sedona, Arizona.

In 1985-86, the last year of his life, Ann Eller was the personal assistant to the very well known ufologist J. Allen Hynek. Hynek, an astronomer and a physicist, acted as scientific adviser to three consecutive UFO studies undertaken by the US Air Force:Project Sign(1947-49),Project Grudge(1949-52), and the infamousProject Blue Book(1952-69). Starting out as a skeptic, Hynek came to understand that the UFOs and their occupants were very real indeed.As an experiencer, Ann reveals a fresh approach to what it was like working for Hynek – as well as what Hynek really thought and may have known about UFOs. She relates several anecdotes including a slightly different twist on Hynek’s involvement as technical advisor to Steven Spielberg onClose Encounters of the Third Kind. This 28 minute interview, which we’ve only just released in September 2008 (having extracted some of the audio from a corrupted video) is an interesting and important new resource to all serious researchers and historians of the subject.