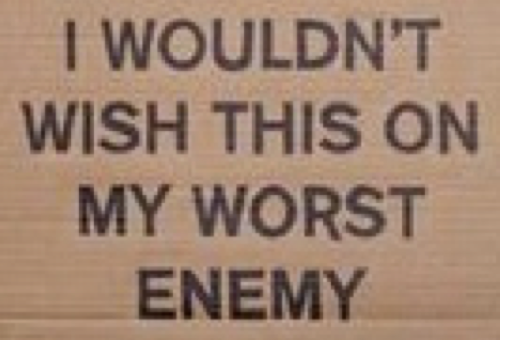 LOS ANGELES – August 27, 2015 – Is it ‘really’ being left as a “choice” for displaced people to be RFID’d ( micro chip implanted ) or FEMA imprisoned as was recently reported?

Are homeless people ( men, women and children ) being culled now for JADE HELM 15 on steroids as it grows in September 2015?

Only a few days beforehand, everyone saw ‘clearly marked’ DHS “Field Operations” white-colored vehicles ( Ford Explorer type SUVs and Ford Crown Victorias ) cruising this entire area where every day they meet for lunch, alongside County of Los Angeles Sheriff’s Department vehicles, at the local greasy spoon ( Pit Stop on Normandie Ave. in Torrance, CA ), and within 2-weeks, displaced people forraging recycleables off the streets are swept from them too.

Rousted, in the dead of early morning, and completely routed-out of vacant fields, cement drainage ditches, cubby holes, and interstate bridge over-passes are their only place left on Earth to sleep from where they are abruptly moved out-of as all their personal belongings are scooped-up with road-grading tractor equipment, dumped, and smoothed-over to appear as though no one was ever occupying these barren land areas.

Just ‘today’ ( 26AUG15 ) they rounded-up nearly 1,000 displaced people ( just in my area alone ). Homeless are disappearing, and then the following day I see what appear to be new arrival homeless wearing hospital wrist bands roaming around.

Right where you bank, get fuel, shop and eat fast-food, every shopping center corner, displaced people are now being turned into “Zombies” where you park, and while mainstream news mentions “homeless becoming aggressive,” there is a reason for this, which mainstream news is ‘not revealing any details’ about.

First it was Russia, now a roaring epidemic in America the Homeland is besieged by the ‘new clandestine drugs’ known as “Flakka” [ NOTE: often resembling what most drug users ‘think’ is just a different form of ‘crack cocaine’ or ‘crystal meth’ that takes on halucinogenic properties of ‘extremely heightened paranoid psychosis’ ], and then if that isn’t dangerous enough to unwitting victims whom ate displaced then there is the new drug nicknamed “Krokodil” [ NOTE: resembling the Zombie attack modes mistakenly diagnosed as ‘bath salts’, this new drug nickname is ‘Krok’, ‘Krokodil’, ‘Crocodile’, ‘Alligator’, ‘Gator’, ‘Zombie’ – actually named ‘Desomorphine’ – often placed in ‘liquids’ ] are here in South Bay Los Angeles and displaced people ( homeless ) are being poisoned to death after they turn into psychotic-like ‘Zombies’ that both citizens and official first responders are witnessing increased instances of; akin to LSD behavior, skin abscesses, crustaceans skin growths, and ‘demonic possession’ behaviors no one in their bright mind wants to be anywhere near such people. Hence, even further societal alienation of displaced people ( homeless ). Currently, because so many ‘homeless women’ have succumbed to such as ‘unwitting victims’ their former loved ones are discussing methods by which vigilantism may soon ensue over the gang member drug pushers. While it is unknown as-to whether the rash of female homeless deaths along with drug dealers being being murdered are connected, the death rate linked to displaced persons persons is on a definitive upswing.

Curiously, when ‘likely murder suspects’ are even ‘witnessed’ in most of these local area deaths, these are being left ‘uninvestigated’ by the Los Angeles County Sheriff’s Department’, which spells ‘collusion’ between officials and ‘illegal drug administrators’ ( “kingpins” ).

I’ve been hearing many displaced people ( homeless ), whom do ‘not use or abuse themself with any drugs or alcohol’, recently start saying ( ‘alot’ ):

“Somebody must’ve put something in my water bottle. I don’t know what’s wrong with me. I can’t keep my balance. I’m sweating like mad. I cannot see well. I ache all over.”

Those classic symptoms are occurring more and more frequently, and even more curiously, only a few days before DHS guided Los Angeles County Sheriff law enforcement round-ups begin taking place throughout the South Bay area and throughout The City of Greater Los Angeles.

What mainstream news does not reveal is law enforcement officers, fresh back from foreign war zone theatres of operation overseas, are being singled-out ( here and there throughout departmental divisions ) on ‘clandestine pay-off schemes’ in cooperative efforts with Latino and African gang member drug distributors whom are typically obtaining their supply of illegal narcotics from owners of ‘very large commercial and industrial area gardening and maintenance businesses’ for commercial property real estate management companies, land owners of whom are ‘non-resident professionals’ mostly in and around the State of New York where the Jewish mafia controls the Africans and Russians while the Italian mafia controls the Mickey Mouse Latino mafia on the Westcoast of the United States of America.

Don’t believe it? Look around at these ‘high crime rate brightly lit and clean shopping center areas’ and you will ‘not see any graffiti’ anywhere on the ‘walls of these particular area shopping center business buildings’, and ask yourself, “Why”

These areas are ‘precisely where gang members ( between dusk through just before closing ) distribute drugs through their networks of ‘bicycle peddlers’ without any law enforcement interference. How?

Displaced People Carted Off To Where?

There is now a new breed ( if you so choose to call them this ) ‘new Xombies’ ( Zombies / The Wild Ones ) flooding into Los Angeles South Bay local area streets where I’ve been homeless since 2008, and I’ve never seen anything like these particular displaced people – not even close to this caliber of individuals – ever before.

It’s as though the State of California mental institution locked ward hospitals opened all their insane asylum doors and let patients out to go off and roam and mix in with what few homeless are left after these DHS police street sweep round-up raids just south of Los Angeles in South Bay.

Areas where increased security guard presence along with more and more extremely bright lighted parking lots; so intensely bright at midnight these areas are like daylight where few shadows exist, however do not be deceived, because ‘the crime rate in these areas are much higher than ever before’

It’s about time for me to leave because I don’t want to be around here so close to all the cammo painted military helicopters shuttling people from U.S. Navy ships in the Port of Los Angeles to an undisclosed area near El Segundo that appears to be Hawthorne Airport just south of LAX airport during the late afternoon every day.

Black Ops ( “Flying Wing,” predecessor of the Stealth Bomber D-4 Spirit ) was at Hawthorne Airport ( near El Segundo ) in 1943. Why not now, for JADE HELM 15, and what will ‘it’ be the ‘predecessor’ of soon to come?

Yesterday and day before, came the small 2-pack ( making 2 runs back and forth from Terminal Island to Hawthorne Airport. Were these U.S. Navy grey-colored helicopter gunships, which appeared carrying what looked like napalm pontoons, only electronic bombs stuffed with trial EMP or counter-EMP key-critical ‘limited local area signal restorers for smartphones’ or the same for certain local ATM machines that are to pay-out only to key users of such clandestine systems?

Today came the BlackHawks, painted Navy grey but with white cammo splotches plus an unusual appearing ‘black graphic wrap’ on top and just aft of their main rotors.

What will tomorrow look like for us pissant-peasants down here?

Today, they ( the Powers That Will ) just took “Mr. Robot” airwaves of the USA Network.

You tell me what is going on. Is it live or will everything left we know be reduced to mere memorex?

How many people’s systems are still up? Can people run a government gauntlet?

‘If’ today all that I’m seeing is only a mirage, which it’s ‘not’, and suddenly what we knew as ‘normal’ suddenly goes upsidedown becoming even more-real tomorrow, where will we be? What will ‘you’ do? What ‘can’ you do?

It’s just past 6 in the evening, the Sun is still up, and here come more military choppers off the west coast of southern California. We can all hear the helo blades beating the air above our heads; if southern California is ‘not’ Viet Nam – what has America’s Homeland become?

Will the U.S. turn its focus on foreign displaced persons ( latino migrants ) as U.S. domestic displaced persons continue to vanish without a trace? What is the new policies of the U.S. Border Patrol today? Be sure to carefully review the additional research reference links provided ( further below ) within this UPI Guy Blog column interim report