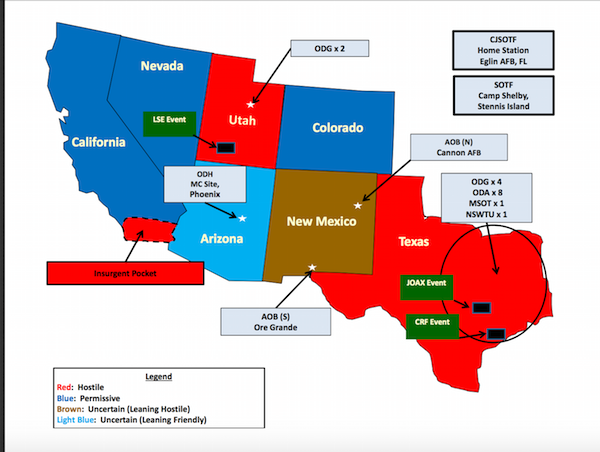 In light of recent happenings around the whole subject matter concerning Jade Helm and other supposed military exercises being conducted now and during the upcoming months throughout the summer up until (we are told) September 15th… Why should we care?

Does it matter for example if U.S. military divisions are conducting exercises that pit STATES against each other — posing one state as hostile and another as “friendly” to those forces in a game playing scenario?  I say it does.  I say that the uneasy feeling many are expressing on the internet (our forum for discussing among ourselves what is really going on) is logical considering what is being proposed.  Can anyone who has paid any attention to the Snowden disclosures seriously think that creating a hypothetical CIVIL WAR type scenario on our streets and cities is simply a useless exercise in military self indulgence?  What is the fact of this going on within the National Security State that is currently spying on its citizens without remorse or limit really saying about their “plans for our future”?  No matter how you look at it, Jade Helm and other military exercises that pit our military against the people of the United States and also create hypothetical “good states versus bad states” cannot be a good thing.  In fact, the very existence of such manuvers suggest that plans are afoot to ala Nazi Germany round up so-called dissidents and demonstrators regardless of how patriotic their concerns are…

Our so-called United States are being challenged within and without our so-called borders.  And challenging states, patriots and rebels in a game playing scenario is not what our military was brought on board to do… Training our military to go after our own citizens is not only highly questionable it indicates an exceedingly diabolical intent on the part of those in charge.

Citizens are right to be concerned about this type of instigation and so-called “training” taking place on our streets.

The following links will again link to other links substantiating the facts surrounding the planning and intentions behind Jade Helm and other planned military exercises: