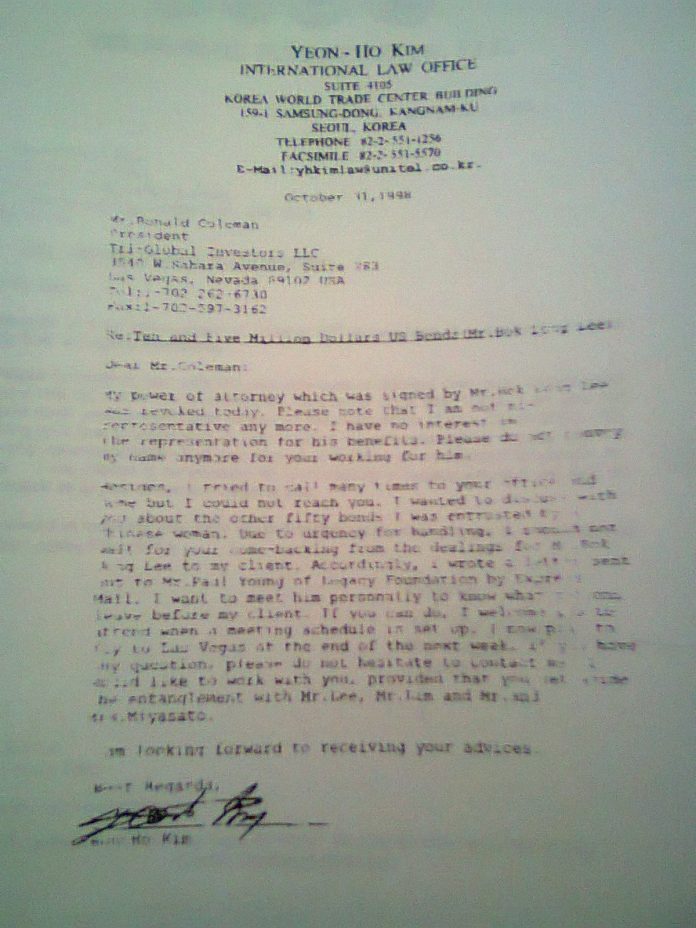 Please find below another report and image attachment ( i.e. of Yeon

Ko Him, the lawyer in Korea representing Chinese interests to see an

property building vault, I have copies of earmarked for public release

report ) attachment for the UPI guest blog at Project Camelot. 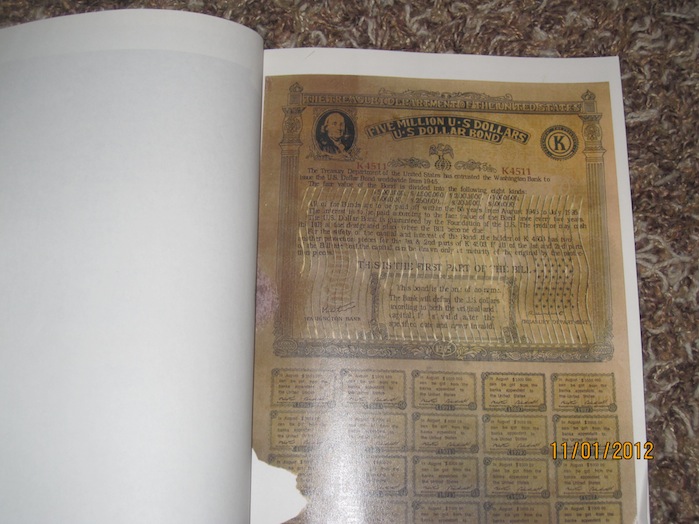 proportions on a global scale between banks and people since 1929 –

when the U.S. stock market collapsed and the Great Depression set in –

another horizon now approaches from the Middle East, Africa and

systems over U.S. dollar currency that was secretly refused during a

The following report is comprised of three (3) major intelligence

1. International historical information most of the public was unaware

2. International current information most of the public was unaware of

All three ( 3 ) major information studies ( above ) were privately

researched from 2002 through 2005 but never intended for full public

The condensed version of smaller reports in an obscure 2005 report

serves as a general overview of information the general public might

wish to review about ‘from where’ and ‘to where’ international affairs

may be seen headed in the ‘not too distant future’.

This is ‘not’ a comprehensive report of all data retrieved, collected

“If that favoritism spreads, causing an even sharper spike in the

price of oil on world markets, the fiat currency system of today could

If perceived as an ‘economic threat’, where the U.S. detects signs of

war’ will surely break out; as they say – ‘In the interest of U.S.

And, less we forget, ‘where a war requires no huge amounts of oil

consumption it can only spell two ( 2 ) types of war.

Besides the strain U.S. intelligence agencies envision on its own fiat

dismantle the U.S. currency system but at the same time derail the

With both ‘foreign and domestic economic threat level perceptions’

increasing, what will a Superpower country like the United States do

with those types of ‘collective challenges’?

Albeit ‘human loss of life’ and/or ‘economic property loss’, at ‘what

price must we pay for truth’?

choices by humanity for furthering humanity rather than erupting into

chaos and collapsing the world we know all around us.

Bits and pieces of history ‘now meeting-up in curious fashioned

This heads-up report allows us to discern where new governmemt

announcements on our horizons lead to cliffhanging realities never

admonishing others on ‘speculative boom’ at the ‘stock and commodity

exchanges’ where problems were attributed only by ‘excessive money

witnessed its stock exchange crash followed by The Great Depression

Col. Harwood fought against printing ‘paper money’ he saw as an

financing ‘U.S. Public Debt’, which Harwood pointed at as the U.S.

policy ‘fraud committed to the detriment of the citizen’ whose savings

were ‘annihilated by inflation’.

Harwood viewed ‘gold’ – and a ‘currency linked to gold standards’ – as

a ‘guarantee’ whereby a ‘stability oriented monetary policy’ could act

as a ‘safeguard against U.S. government excessive financing demands’.

World developments, between the 1920s and 1930s, convinced Colonel

was ‘insufficient’ – with respect to ‘methods used by applied

research’ – so, he increased focus on improving that ‘scientific

along with another man’s vision’ allowed the 21st century global

economic collapse to occur; an ‘economic meltdown’ that will – even

the Massachusetts Institute of Technology ( MIT – in Cambridge,

Massachusetts ) – a ‘unique’ organization was conceived to ‘enhance’

by ‘scientific technical means’, the ‘data flow’ of U.S. ‘economic

information’; led by the ‘vision’ of Dr. Vannevar Bush ( MIT

assets – especially ‘gold’ – having passed through banks of

Switzerland where suspiciously only $409,000,000 million in gold

appears purchased during the Third Reich, however other countries

received Germany war assets, according to the U.S. Office Of Strategic

Both OSS ECONIC X-2 Unit Teams were supervised from Bonn, Germany by a

Director Of Central Intelligence ( DCI ) for the U.S. Central

During World War II, Lt. Bill Casey was, for a period of time,

military war asset seizures with the BANK FOR INTERNATIONAL

It was not until 2006, when a class-action type law suit filed against

the Vatican in 2000 was dismissed on Vatican legal grounds of

‘non-disclosure’ based on ‘Sovereign Immunity’.

The Vatican maintained its public refusal to open any of its own such accounts.

A few months later, in 2007, the global economy began collapsing.

[ NOTE: Deleted strangely from Internet Archives, were the following

website that would have lent more information continuity to my above