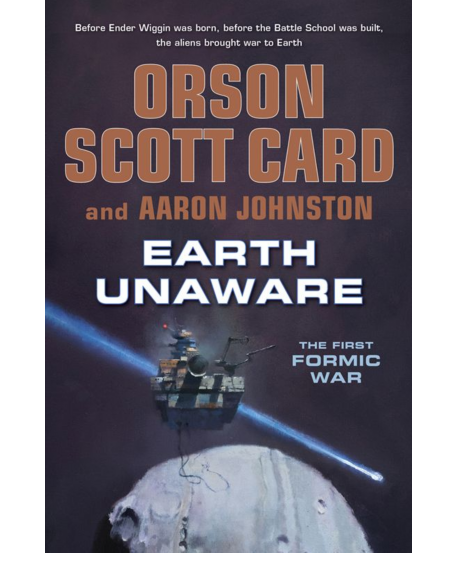 As many will know Orson Scott Card is the author of ENDERS GAME… a fabulous book which is a soon to be released movie.

…“What do we train for?” The man answered in unison. “Every contingency!” Wit doubled his volume. “What do we train for?” “EVERY CONTINGENCY!” “A contingency is a possible event that cannot be predicted with certainty,” said Wit. “And we cannot with one hundred percent certainty dismiss the validity of this idea. Is it likely? No. It is possible? Yes. Is it absurd? You may think so, but I would rather be trained for the absurd than dead.” The men said nothing. He had their attention. “Which militaries in the world are preparing for such an event?” asked Wit. “Answer: none. Which militaries are prepared for tech weapons far beyond our own? Answer: none. Which militaries would be caught with their pants down and completely unprepared for this? Answer: all of them. But not us. What do we train for?” “EVERY CONTINGENCY!” “So how do we prepare?” asked Wit. They answered him with silence. “You analyze before you act,” said Wit. “You have no idea what you’re up against. Your previous training and tactics may get you killed the instant you attempt them. You can’t assume this enemy will think or fight or react like a human. A terrified human will flee. A terrified pit bull will jump for your jugular. How will an alien respond to fear? Does it experience fear at all? Analyze before youact. Take note of everything. Their movement, weapons, group behavior, anatomy, reactions to the environment, speed, equipment. Even the smallest detail is valuable new intelligence. Analyze before you act.” A few of the men were nodding. “And in all cases,” said Wit, “without exception, you always presume hostile intent. You must presume they want to kill you. That doesn’t mean you shoot first, it just means you never, never, never trust. And when they do show hostility, you do not hesitate to take them down.” He looked at each of the men in turn. “Situation. A hundred aliens drop into camp. What do we do? Deen?” “Analyze before we act, sir. Presume hostile intent.” “Correct. And what do we do if they prove to be hostile?”