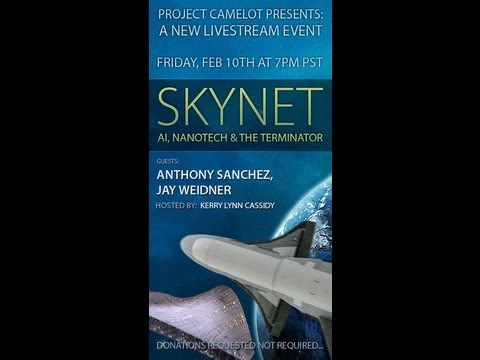 On American Freedom Radio  — to LISTEN TO THE ARCHIVED SHOW

My guest(s): Ralph & Marsha Ring : re free energy, his work with Otis Carr and more…

SKYNET :  AI, NANOTECH AND THE TERMINATOR

This is a live broadcast of a Project Camelot Roundtable discussion with Anthony Sanchez and Jay Weidner hosted by Kerry Cassidy from Project Camelot. We discuss the evidence for a network of Low Earth Orbiting Satellites (called Project Leonid) that are run by Artificial Intelligence.  They are nano satellites that have their own defensive capabilities. This discussion details some of the evidence put forward by Anthony Sanchez in a soon to be published book on the subject.

Jay Weidner brings with him his vast knowledge and background in the areas surrounding Crypto Terrestrials and the occult. This is a cutting edge dialog between researchers into the conspiracy facts that comprise the Matrix and seeing into the mysteries behind the facade.