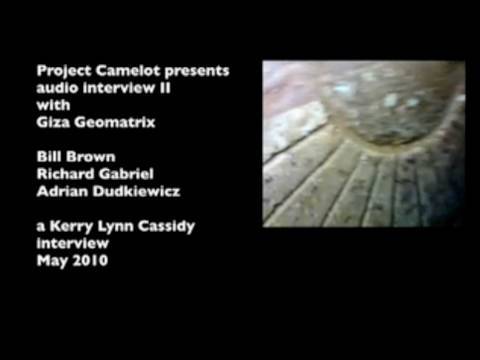 This is the second interview with the team from Giza Geomatrix. We cover what Bill Brown and his team have found using Ground Penetrating Radar…within the Khufu Temple complex that extends from the Giza Plateau and beyond, revealing a hidden technology. In this ground breaking interview the team talks about the coverup and nefarious digs as well as a mysterious force field that is keeping even the powers-that-be from getting close to what may be the entrance to the Hall of Records. According to their findings, a tunnel system exists below that goes from there to the Great Pyramid and all the way to Saqqarra.

“A record of Atlantis from the beginning of those periods when the Spirit took form, or began the encasements in that land; and the developments of the peoples throughout their sojourn; together with the record of the first destruction, and the changes that took place in the land; with the record of the sojournings of the peoples and their varied activities in other lands, and a record of the meetings of all the nations or lands, for the activities in the destruction of Atlantis; and the building of the pyramid of initiation, together with whom, what, and where the opening of the records would come, that are as copies from the sunken Atlantis. For with the change, it [Atlantis] must rise again. In position, this lies — as the sun rises from the waters — as the line of the shadows (or light) falls between the paws of the Sphinx; that was set later as the sentinel or guard and which may not be entered from the connecting chambers from the Sphinx’s right paw until the time has been fulfilled when the changes must be active in this sphere of man’s experience. Then [it lies] between the Sphinx and the river”. [378-16; Oct 29, 1933]

Richard Gabriel and Bill Brown also talk about what they believe they have discovered as an Earth Protection System that connects important power places around the planet. They believe this can be activated to create a force field that will protect the Earth from coming Earth changes and Solar Cycle 24.