The recent crash of the Polish jet is suspicious in the extreme. What are the chances of getting the President, the head of the central bank and military top brass all on one jet at the same time headed for a fogged in airport?

According to the Wikipedia article:

.."On 10 April 2010, a Polish Air Force Tupolev Tu-154M aircraft crashed near Smolensk, Russia, killing all 96 passengers and crew. Those killed included the Poland's President Lech Kaczyński and his wife; the Chief of the General Staff of the Armed Forces and other senior military officers; the President of the National Bank; the Deputy Minister of Foreign Affairs; government officers, vice-speakers and members of parliament; and senior members of clergy…."

As most people know, top officials do not travel together on the same craft to avoid just such an eventuality… One can easily imagine that they were loaded onto the plane at gunpoint and flown to their deaths. The question is, what is the purpose behind this murder? From what I can gather, that Polish administration was not in compliance with Russian plans for the country.

On Protecting Sources and Confidentiality

This statement has been written response to the recent actions of Bill Ryan and speaking to the core reason for the split within Camelot and why the building of the portal became necessary.

I have been silent until now and have not spoken out publicly at any length due to my desire to preserve the good standing and credibility of Project Camelot. However, I can no longer remain silent due to the statement made by Bill Ryan on his site regarding what he considers to be a "takedown" of Camelot. The only takedown has been the complete and total responsibility of myself and Bill Ryan. We no longer agree on core values or perceptions and have not for over 1 and 1/2 years… therefore we have archived the Camelot site into what is now known as the Camelot Library.

I am concerned that the good name and integrity of Project Camelot has been dealt a serious blow by the actions of Bill Ryan. As many of you know, the split within Camelot has become the object of much internet gossip…

If one keeps in mind that our credibility and integrity are the main and integral parts of what our name stands for in the world that we inhabit as, in essence, investigative journalists into the nature of reality and revealing the truth beneath the Matrix… then our reputation is all we have to allow us to continue to pursue our mission and maintain our standing in the internet community.

Note: This standing was recently brought into question when Bill Ryan came forward to debunk and out two whistleblowers. He did this, in spite of the fact that both these whistleblowers came to Camelot in trust and in secrecy, placing themselves at the mercy of Camelot with the complete belief that Project Camelot was an organization of integrity and would fully honor any secrecy in their dealings with those individuals as clearly stated in the mission statement on our website.

Unfortunately, Bill Ryan recently decided that the statement of confidentiality and secrecy was to be amended to say in essence "if I, Bill Ryan, decide subsequently, that the story told to us in confidence is false or misleading I will then take it upon myself to out the witness and thereby reveal our "source" to the world, putting their lives and the lives of their loved ones in danger, as well as violating the clear implied and expressed agreement that we have established in writing previously with them and to the world…."

Along these lines, I submit the following image from the Wikileaks.org website of their now famous release of the videotape of collateral murder by U.S. forces in Iraq during which two journalists were also killed. This statement — from that video states the CORE principle by which they operate. This is a nod to them and their integrity. I am sad to say this cannot any longer be the claim of Project Camelot…

To be clear, they state "Wikileaks exists to help you safely reveal important material to the world. We have an unbroken record in protecting confidential sources." 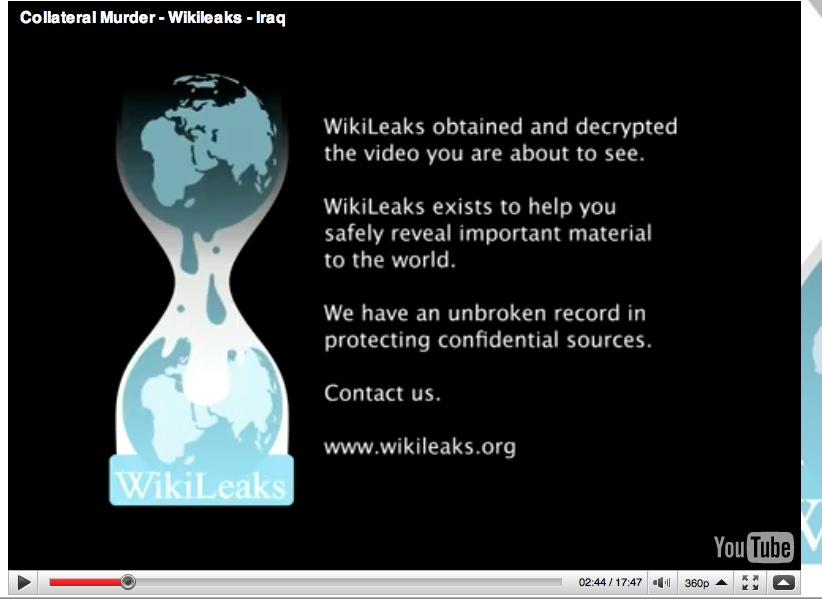 At question is our reputation which will precede us wherever we go in the future with regard to Project Camelot and therefore we have been left with the decision as to how we intend to operate going forward. The Portal was built to allow for this difference in our styles and approaches to whistleblowers and confidential testimony. I can state here, unequivocally, that I do honor confidentiality and will continue to pledge to protect my sources against all odds regardless of whether they be external or internal to Camelot.

At the same time, I want to state here that the recent statements of Bill Ryan with regard to Illuminati takeover of Camelot are not only completely unfounded but a subterfuge to cover gross errors in judgment that led him to cast 2 whistleblowers to the dogs… in severe disregard of his pledge to uphold the mission of Camelot and in violation of all that Project Camelot claims to stand for.

After repeated requests to Bill Ryan that he reconsider his position and views, I was left with no recourse but to publish this statement.

While he will needless to say, go to great lengths to show the world that one was an unbalanced hoaxer and the other is, he believes, acting as an agent of the Illuminati in a dark plot to take down Camelot, neither is true. Camelot is operating as before with the exception that we have reached the point where working together has become impossible due to our differences in views and interpretations of what it means to have integrity.