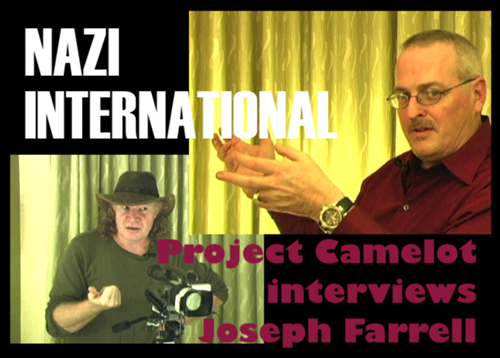 — I attempted to stress in my most recent book, NAZI INTERNATIONAL, that the postwar Nazis were not merely tiny enclaves of war criminals huddled, panic-stricken, together in tiny enclaves in Latin America and elsewhere. They were, on the contrary, highly organized, well-funded, had their own intelligence and security apparatus, and most importantly, were conducting and continuing the lines of research they had begun during the war.

The title of this interview, Nazi International, refers to Joseph Farrell's latest book, in which he details – as do Camelot witnesses Jim Marrs and Peter Levenda, and many other researchers (including Jim Keith, who died in unusual circumstances and to whom we pay tribute here) – how the Nazis were experimenting with technology extremely advanced for their time, and how many Nazi scientists, evaluated as being valuable resources for post-war America, were repatriated to the US under Project Paperclip.

We first heard of Joseph Farrell from Richard Hoagland – and soon after from Nick Cook, the author of The Hunt for Zero Point. Farrell, like Peter Levenda, is essentially an academic: a document researcher who digs deep into historical detail and has become fascinated, as many others have, with the hidden history of the Third Reich. He has continued Igor Witkowski's and Nick Cook's research into the enigmatic Nazi Bell: an experimental device, classified at the highest level, that seems to have been used to investigate time distortion effects or antigravity – very possibly both – based on the beginnings of theoretical torsion physics that was being developed in the 1920s and 1930s by a number of brilliant European scientists, themselves very much ahead of their time.

In this interview, Bill Ryan takes the lead and talks with Joseph Farrell in some depth about his work. The interview takes the viewer on a journey which starts before the Second World War, and explores just what German scientists may have been doing in great secret, with the full support of the SS. And, as the title of the video indicates, the story by no means ends there. This video may be of considerable interest to students of wartime advanced technology, and of the hidden history of the Third Reich.